How 24 Week Twins Inspired Two Parents to Give Back

Anne-Marie & Jonathan are not just Graham’s Foundation NICU Ambassadors. They’re also the parents behind one of the biggest annual Parents of Preemies Day celebrations! We had a chance to ask them about their prematurity journey and why they dedicated their time to helping a new generation of parents of preemies. 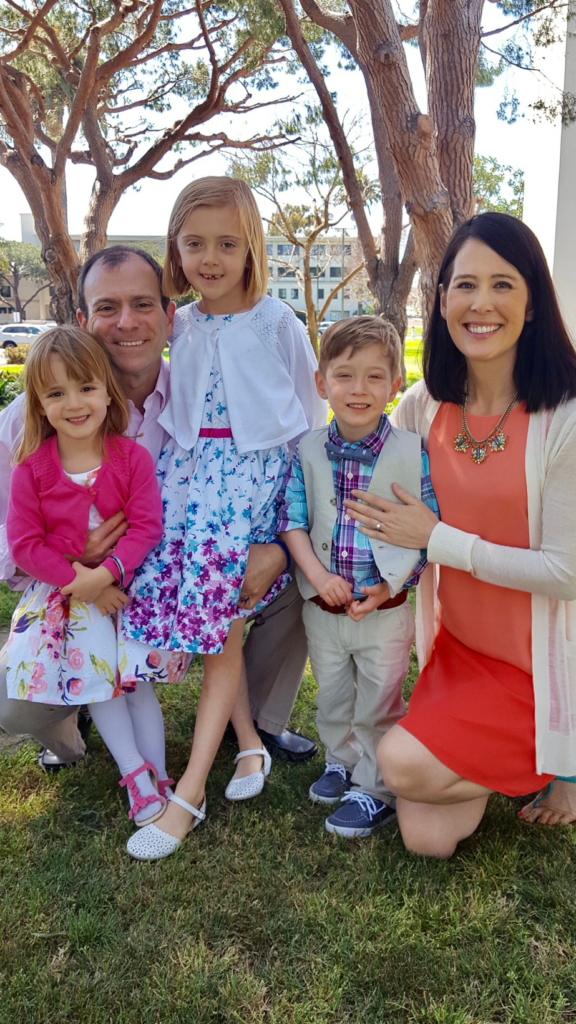 Q. What was your family’s experience with premature birth?

A. My husband Jonathan and I were thrilled to learn we were pregnant with boy/girl twins. We have an older daughter, now seven, who was born at term and it never occurred to us that something like that this would happen.  Unfortunately, around Week 22 gestation, one of the amniotic sacs on the twins ruptured and I was immediately put on bed rest at UCLA Santa Monica hospital.  We were all committed to many weeks of bedrest until the twins could be safely birthed however, about two weeks later, I unexpectedly went into labor in the middle of the night and the twins had to be emergency delivered.  They were born at 24 weeks and 2 days gestation and each child weighed about a pound and a half.

Both twins, Leo & Hannah, had a wide range of health complications and issues as a result of their extreme prematurity including skin and central line infections, infiltrations of the skin, bilateral inguinal hernias, and more.  Around Week 33 gestational age, Leo developed a serious case of Retinopathy of Prematurity (ROP) and had to ambulanced to UCLA’s medical center in Westwood where he was injected in one eye with an experimental drug.  Consequently, he could not be move hospitals again and we now found ourselves with two babies in two different NICUs for the remainder of their time in the hospital as well as a then-three and a half year old daughter at home to care for.  It was certainly a challenging time for us all.  I experienced a wide range of emotions from despair to hope and experienced depression and anxiety throughout the babies’ stay in the NICU.  I was also pumping breastmilk for them every few hours, day and night, and this contributed to feeling both exhausted and overwhelmed. 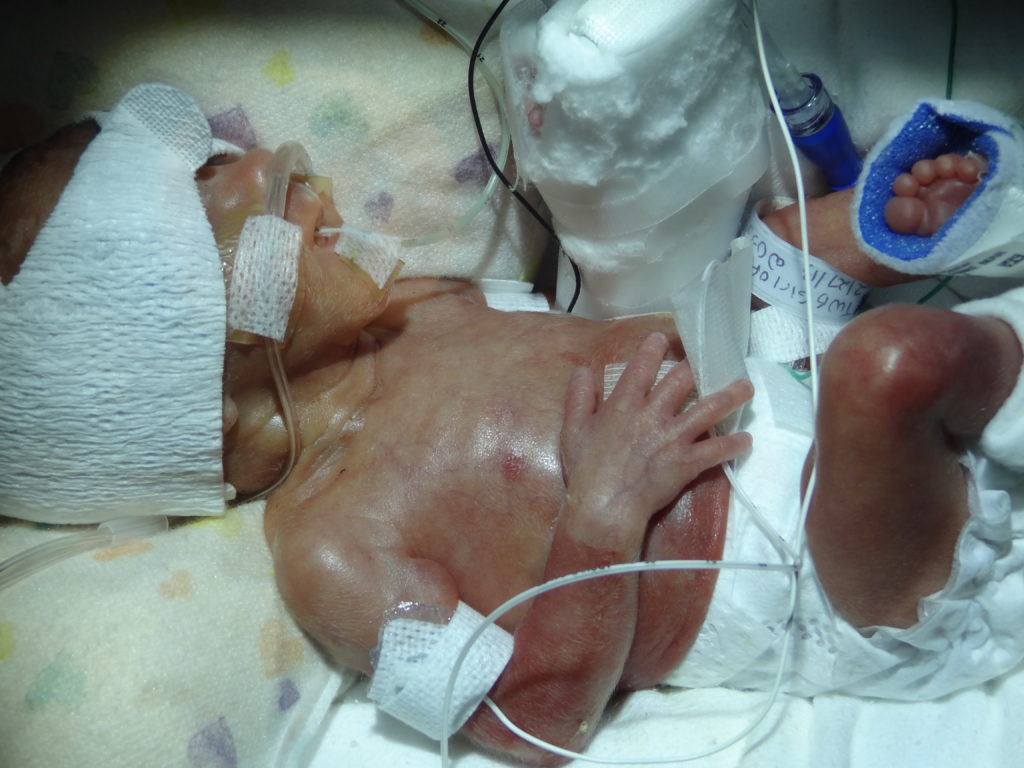 Hannah spent a total of 100 days in the NICU and Leo spent 107 days in the NICU and both children required several rounds of surgeries post-NICU to repair the hernias and skin infiltration.  It was a real roller coaster of a ride as they often say about the NICU experience. I think that one of the hardest things was that Leo gained weight so slowly. Every night, we would call the NICU from home and get a report on his weight. It seemed like an eternity for him to put on a pound, especially compared with Hannah, who was growing at a faster rate. 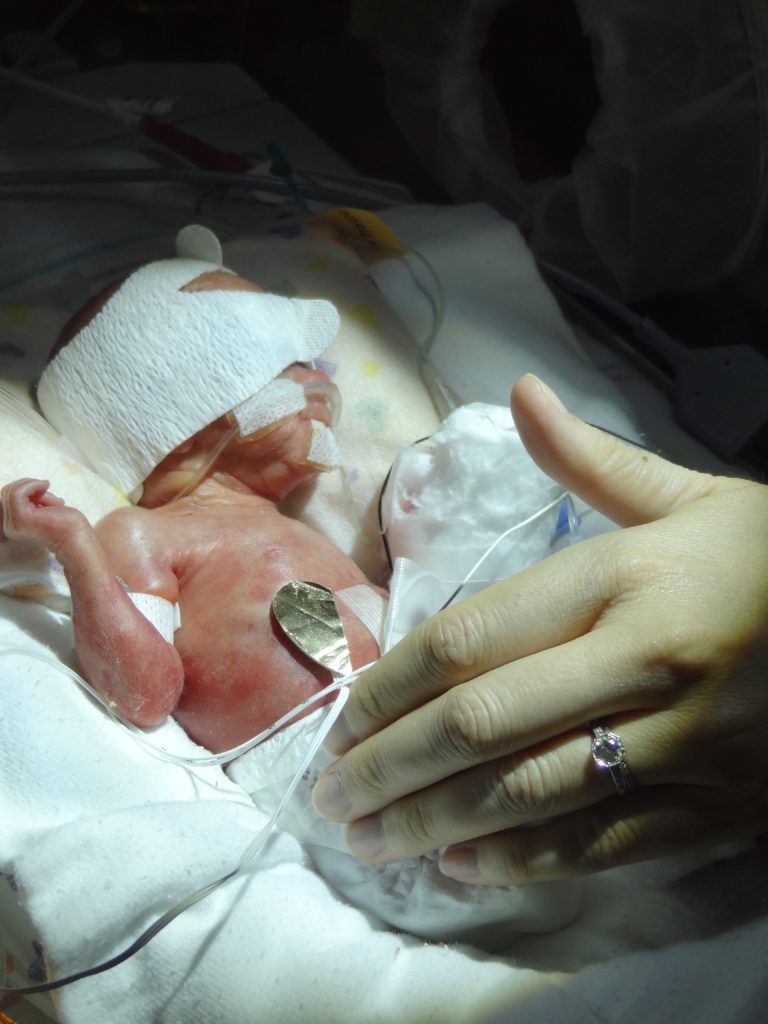 Today, Leo & Hannah are active, thriving and pretty typical four year olds.  Both children benefited greatly from several years of early intervention services including physical, occupational and speech therapy.  The kids attend a local pre-school and in another year are off to kindergarten and we couldn’t be more thrilled about where they are now.  Seeing them with their friends, one would never know the difficult start that they had in life.  We marvel at their sturdiness and health after such a rocky beginning. 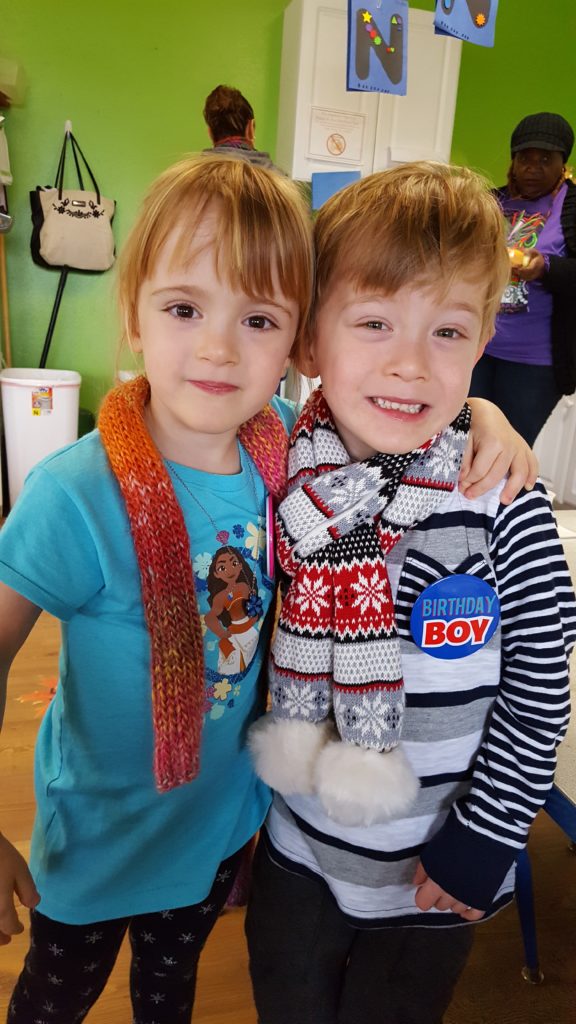 Q. What made you decide you wanted to give back? How did you hear about Graham’s Foundation’s NICU Ambassador program?

A. It was a pretty rough and dark time for us with the babies in the NICU and it seemed interminable.  None of our family or close friends had been through anything similar to what we were experiencing so it was difficult to relate this with our inner circle.  One of our favorite NICU Charge nurses mentioned Graham’s Foundation to us and told us that the organization had a local NICU Ambassador who could talk with us if we wanted.  We emailed Graham’s and within a few days received a message from Nicole Bugna-Doyle, our local NICU Ambassador and mother of micropreemie twins herself.

Of all the social services the hospital tried to offer us including weekly parental support groups or occasional talks with the hospital’s Social Worker, speaking with Nicole and later with her husband John was probably the single most powerful and effective thing we could have done during our medical odyssey.

We learned a lot from Nicole and she gave us many tips and insights on how to deal more effectively with the hospital, doctors, and insurance company, and also provided us with other resources available to families with preemies that we would not have otherwise known about.  Seeing Nicole and John’s beautiful twin boys also gave us enough comfort and hope as to help us see the “light at the end of the tunnel”.  It made us feel much more confident that our babies’ time in the NICU would come to an end one day and that we would be able to finally take them home with us.

We feel so grateful for the medical care and early intervention services our children received and we know that a lot of families don’t always have such access to care or such positive outcomes with their kids.  Before we became NICU Ambassadors, we were told by a few of the other families that, once you go through the experience of having a child or multiple children in the NICU, all you want to do is help others go through the experience and “pay it forward”.  That message really resonated and stuck with us and this is primarily why we decided to get involved with Graham’s Foundation and the NICU Ambassador program.

Q. What are your family’s goals as NICU Ambassadors? What have you been able to accomplish in the role?

A. Jonathan and I become NICU Ambassadors for two local hospitals UCLA Santa Monica as well as St John’s Hospital in Santa Monica.  We are available for outreach when a family seeks help through the Graham’s Foundation website.  We also distribute NICU Care Packages and other items from Graham’s Foundation for families in the NICUs at these hospitals a few times each year.

As well, we have organized and hosted a “Parents of Preemies Day” event for Greater Los Angeles at UCLA Medical Center for the past three years.  These have been wonderful celebrations of the Parents of premature children and an opportunity to take a few hours on the first Sunday each May to meet other similar families, share stories, enjoy some entertainment, and connect with one another.   With UCLA’s generous support, we hope the event keeps growing and continues for many years to come.

Q. You host a Parents of Preemies Day event each year – what has the response been in your NICU?

A. The response from the NICUs, the medical staff and the hospital administration has been very positive.  As mentioned, this year will be our third annual event and UCLA has been extremely supportive both in terms of providing resources like the event space, food and complimentary parking as well as helping us get the word out about Parents of Preemies Day to current or former NICU babies and their families.

We recognize though it may be hard for some families with babies still in the NICU to break away and come spend the afternoon with other families who have graduated already from the NICU.  Sometimes the experience is too fresh and often painful for them to leave their baby’s bedside and be comfortable with the idea of “celebrating” themselves, even if it’s only for a few hours and that’s ok.

Our hope is that we can plant seeds in the minds of these and other families about Graham’s Foundation and Parents of Preemies Day and that once they are in a better place with their babies and families, they will consider becoming volunteers and helping others in turn.

Q. What do you think people should know about the NICU Ambassador program? What would you tell parents who are considering joining?

A. We think the program is fantastic and we wish more people knew about it.  We are often surprised to speak with families who have had preemies and spent time in the NICU tell us that they wish they had heard about Graham’s Foundation and the NICU Ambassador program while they were in the hospital.  We would tell parents who are considering joining that they shouldn’t hesitate because it is so rewarding and there is so much value in sharing your experiences and helping other families who are going through what you have been through.  You may not think you will have much impact on them but believe us from personal experience, you will.

Q. What do you think the most important thing a new parent of a preemie needs to hear in the NICU?

A. First and foremost, they should know that you are not alone.  It may feel like that at when you first arrive in the NICU but there are plenty of families out there who have gone through this and it’s important to see them as a critical resource for you.  Contact Graham’s Foundation and use its’ NICU Ambassador or Preemie Parent Mentors program as a way to reach out to other families in your area with preemies who have been through what you are experiencing.   Having walked in your shoes, these parents can give you so much support and guidance that might not otherwise be available to you.

Also, we think it’s important that parents of preemies get informed, ask questions, and don’t be afraid to challenge your nurses and doctors if you think something is amiss or you feel your child is not being best served.  Believe it or not, even with your newborn, you know your baby better than anyone else and it’s crucial that you be their advocate and their voice at this early stage in their life.

Interested in sharing your prematurity story? Email christa @ grahamsfoundation . org with your story and photos or submit via this form.