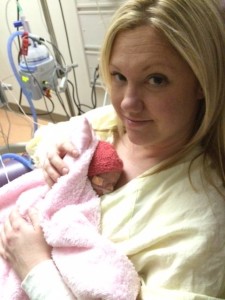 One day in mid April 2014, I was having lunch at the hospital cafeteria, about to return to my daughter’s NICU room, after a few calm minutes to myself. As I packed up my things, I put a bottle of Diet Coke I’d purchased for later on in my tote bag and suddenly it hit me– “This 20 oz bottle of pop weighs more than my daughter currently does”.

A bottle of pop weighed more than my child. That is a horrifying, strange, surreal thing to realize.

My daughter, Tessa Ruth, was born at 27 weeks and 6 days gestation due to severe pre-eclampsia. She was also IUGR (intra-uterine growth restricted). At birth, she weighed 480 grams which is just a hair over 1 pound. In the following days she dipped under the one pound mark a few times. That day at lunch she weighed about 1 pound 3 ounces, or 19 ounces – less than a bottle of soda.

Tessa is my second child. My first pregnancy was easy. “Boring”, I’d say when asked about my experience carrying my son about seven years prior to this pregnancy. I didn’t expect anything different with Tessa. Around 18 weeks gestation, I received a call from my OB saying she was a bit concerned about the elevated AFP (alpha fetoprotein) level that had come back from the lab and she wanted me to go in to see a perinatal specialist. Of course, I started doing online searches, freaking myself out, worrying day and night. 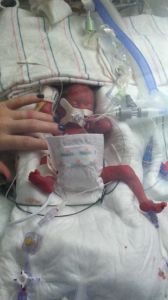 Elevated AFP levels can often be caused by neural tube defects and can result in diagnoses such as spina bifida. I had a couple of tense weeks as I waited for the appointment with the perinatal doctor. I remember going for the appointment, which was essentially just a very long ultrasound. They took lots and lots of measurements and that is when I found out I was having a girl! The doctor came in and told me that everything looked wonderful, she was smaller than most babies measure at 20 weeks, but that I shouldn’t worry. I was so relieved.

At the next routine OB appointment, there was protein in my urine. At the following appointment, I had elevated blood pressure. My doctor started getting slightly worried. She explained that I had signs pointing towards pre-eclampsia and there really wasn’t anything I could do about it or that I could have done to prevent it but she wanted me to go about my life normally. Her hope was that my symptoms would disappear by the next appointment.

I started to get worried and do more and more reading about elevated AFP levels (even though the doctors had ruled out neural tube defects, I was still concerned) and pre-eclampsia. One day, I called my OB doctor and told her I was worried. She asked me to come in the next morning to chat. When I got there, my blood pressure was really high. I remember asking her, “Am I going to have this baby?”. She decided to put me on modified bed rest immediately. I was to go home and not return to work at all. I was allowed to shower and get up to eat but that was about it. 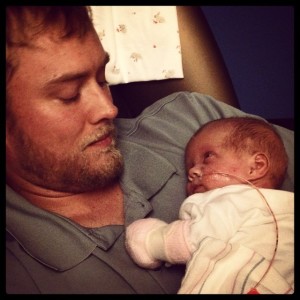 Suddenly, my husband and I had to get people to help with our 7 year old, drive me to appointments, and help around the house. I was 24 weeks pregnant at this point. The next three weeks were boring but crucial. At this point my doctor was saying she hoped to get me to 32 weeks before the baby came. I remember thinking “oh, wow, 32 weeks is so early!”.

At 27 weeks and 3 days, I went in to see the perinatal group for another growth check ultrasound. This one took FOR-EV-ER. The doctor didn’t come in for what felt like an hour after the ultrasound was done. She was very concerned. She told me the baby had not grown since my last scan three weeks before and kindly said “If you are still pregnant by the end of the week, I’d be surprised”. I was gutted. It was too soon. I wasn’t ready.

We went to the hospital where I was admitted and the whirlwind started. Doctors, nurses, visitors, family, noises, beeping, questions, medications, needles, lights, sounds. It was overwhelming. I was started on a magnesium drip to protect her brain. I was given steroid shots to help her developing lungs. I was told about the NICU where she’d be taken to and living –  for possibly months. At this point no one knew if I’d be there one day or six weeks before the baby came. I was told I was officially on hospital bed rest so not to expect to go home. I settled in. After the first night, it wasn’t so bad. I was scared but I really don’t think it all had hit me. 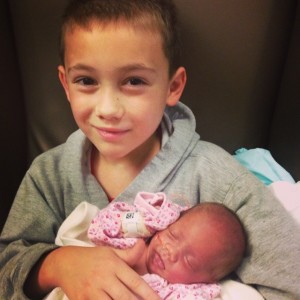 I was admitted on a Friday. On Monday morning, I woke up and the nursing staff couldn’t located the baby’s heartbeat. I mentioned I wasn’t really feeling her move around much. The doctors decided it was time to take me to the operating room for an emergency C-section. I stayed remarkably calm through the procedure (my poor husband didn’t, he was so scared and sort of greenish-yellow colored).

Tessa was a fighter from the beginning. I remember the only thing that kept me going that first day was the fact that, compared to her teeny body, her legs and feet seemed huge and she constantly kicked those little limbs like the future soccer player she will one day be! Tessa was off the ventilator within one day- ONE DAY! She was on various levels of CPAP/BIPAP and high flow cannula for a very long time. As much as I tried to be knowledgeable about what was happening and what she might go through, it was hard with so much information to learn and to not freak out over the what if’s. Life in the NICU became normal for us. I decided to not return to work. I’d spend all day with Tessa then pick up our 7 year old, Henry, from school and go back to the hospital. My husband, Bryan, would meet us there after work. We did this nearly every day for 112 days. We watched our daughter grow bigger, stronger, beat all the odds stacked against her.

I’m in no way pleased that my baby girl was suffering in the beginning and we were very scared. I’m not happy we went through this. However, I am glad we had such a positive experience. Our girl got the very best treatment she could have and that she had nearly no complications. Our family grew stronger because of this.

Tessa is currently 15 months actual (12 months adjusted). She weighs about 18 lbs now. She’s still very petite – even compared to babies just turning one. I don’t care that she’s small. She’s perfect. She’s nearly walking, sort of talking (she kind of says “thank you!”), she is social and happy and beautiful. She’s our miracle baby. She’s my hero.