Adventures in Breastfeeding a Preemie

As a first-time mom, breastfeeding was new. Sure, I’d seen others do it and I subscribed to the “breast is best” philosophy, but I was still surprised when actual liquid started coming out of me in a place it has never come from before. Amazing, yes absolutely. Easy? Not so much, especially feeding a preemie.

Preemies are tricky to feed – there is a constant tug and pull between needing the nutrition to grow and needing to conserve energy in order to take in that nutrition. It takes less energy to drink a bottle compared to drinking from a breast, so advice like “don’t give your baby a bottle until breastfeeding is established” was thrown to the wind.

When my first child was born at 34 weeks, he latched on and promptly fell asleep. I began the arduous process of building a milk supply with a breastpump, sitting by his isolette in the NICU by day and waking up to that cold piece of plastic at night. When he was discharged from the NICU, the pumping continued: he needed formula powder and corn oil mixed into the breastmilk to increase the calories. 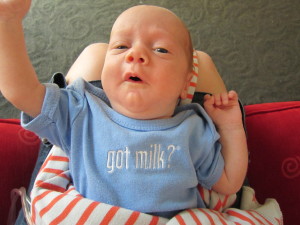 The feeding routine was complex: I felt like a cow for the 10-15 minutes it took to pump, then I felt like a bartender mixing and shaking the powder and oil into his bottle. Feeding him took another 10-15 minutes, and then I turned into a dishwasher to scrub the trillion tiny parts to the pump and set them out to dry so I could do it all again in another hour-and-a-half! It took a few months, but we gradually phased out the bottles and introduced more breastfeeding. Thankfully, he had no preference between breast or bottle.

When my second was born, also at 34 weeks, she showed her preference early on: she liked the instant gratification of the bottle. When I tried to replace bottle feedings with breastfeeding around her due date, she put up a fight. It got to the point where she would scream if I so much as lifted my shirt. I pumped throughout her NICU stay while trying to give my firstborn the attention he needed. We lasted four months before I decided that the “breast is best” philosophy was trumped by the “mom’s sanity is best” philosophy.

My third child showed up at 32 weeks before the suck-swallow reflex had appeared. I was not allowed to put him to breast for 10 days, so continued my love-hate relationship with the breastpump. A week after he was born, the NICU’s lactation consultant stopped by to see how things were going and how supply was holding up. I told her that I was pumping frequently and had enough to feed my baby, but only because he was taking in such tiny amounts at each feeding. She handed me a bunch of literature about herbal supplements, breathing exercises, and Kangaroo care. She asked if I was stressed out (who in the NICU is not stressed out?!) and recommended that I look at pictures of my baby while pumping.

With a few adjustments, we brought home a freezer-full of breastmilk when he was discharged from the NICU and successfully transitioned to breastfeeding exclusively a few months later.

While I am personally biased toward breastfeeding, I also think that it is so difficult for NICU families to feed preemies regardless of how you choose to feed them. If you’re trying to breastfeed a preemie and you really want to, hang in there but don’t beat yourself up! If you’re feeling guilty about formula-feeding, stop it: you can love your baby in so many other ways.

I agree with Dr. Claire McCarthy when she says, “There’s way more to parenthood than breastfeeding.”

Jessica is our mentor for feeding support.