Bonding in the NICU and Beyond

When I was pregnant, I read a bunch of earthy books that stated how important it was to hold your baby right after birth. This dramatic moment is played up as the most crucial in your bonding experience.

But when my babies were born prematurely via emergency C-sections, there was no victorious moment when they were placed on my chest. There was no snuggling or attempting to breastfeed; I glanced at their faces only briefly before they were whisked off to the NICU in a swarm of nurses and neonatologists. 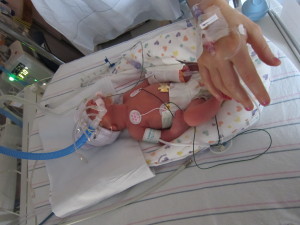 Bonding in the NICU is a tricky business too. Sometimes physical contact is limited, parents are stressed and fearful, and the constant beeping of monitors is disruptive.

During my babies’ stays in the NICU, there were times when I couldn’t hold them because they needed intensive phototherapy for hyperbilirubinemia. I would fold and refold their onesies, snap pictures compulsively, and occasionally sneak a finger into the isolette for them to hold.

NICU parents may not enjoy the same moments as parents of healthy infants, but bonding can happen slowly and surely. I feel close to my children not because of those first newborn moments, but because of the sacrifices I made for them and the joys that they have given me.

Bonding is a process: millions of moments, both dramatic and dull.