Clinical trials and the parent perspective

Graham’s Foundation recently collected data directly from 194 mothers and fathers of preemies in seven different countries* to learn more about parents’ understanding of and opinions about clinical trials. Of those who participated in the survey, 74% had never taken part in a clinical trial, though 47% understood that clinical trials are an important part of medical advancement and would feel good knowing they are contributing to the overall development of neonatal care. 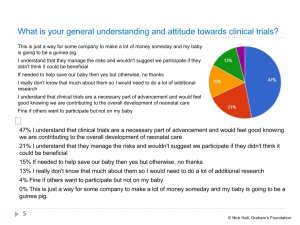 More telling was the result of the information gathering we did prior to conducting the survey. Our goal was to speak to at least one parent whose preemie had participated in one or more clinical trials and while we eventually connected with Holli Olbrich, most of the other parents who responded to our initial query did not even know what clinical trials actually are.

Holli, a nurse who has worked at large university hospitals, shared her experience as a mother of a preemie, Justin, who participated in multiple clinical trials.

Graham’s Foundation: What kinds of trials did your preemie participate in?

Holli: “Justin participated in a clinical trial for a supplement to help develop the eyes. It was used to see if it would prevent the development of ROP. Justin still needed laser eye surgery due to his ROP developing to Stage 3 with plus disease. It was a double blind study, so we do not know if he received the supplement or a placebo. The only difference for Justin’s care in this trial was that a second ophthalmologist had to examine his eyes before the surgery and agree with the first doctor’s findings.”

“We also participated in a double blind study using hydrocortisone to help come off the vent.  This was used on babies who were still on the vent after 4 weeks. We don’t know if Justin got the medication, but he weaned great from the vent after receiving it. He even was successful on CPAP for 2 days, but in the end he needed his PDA ligated. We did this before he would have been given dexamethasone to try and get him off the vent. In the end, his PDA ligation is what helped the most, but at the time he had to recover from two infections before he could be ligated.”

“We also participated in a blood transfusion study. The baby was either on a low threshold or high threshold for transfusions. Justin was in the low threshold, meaning he was not transfused until his hemoglobin was below a certain number (the number changed as he became older).  This study led to the attendings and I having some conversations as I was impatient when I noticed his vital signs changing and felt he needed to be transfused. If I had a good reason for wanting the transfusion they typically agreed with me and would write an addendum to why they opted to transfuse before he reached the lower threshold. I always had the option to take him out of the study (which I threatened) but they were always willing to work with me and consider my input. The doctors wanted to keep him in the study and work with me rather than have him taken out of the study.”

“We were also in a study on families in the NICU and how well prepared we felt based on several factors. This wasn’t a clinical trial, but it was an important part of research into how to better involve families with their babies in the NICU. The hope was that depending on what was found by the study that more money would be allocated to things like meal passes, parking passes, more parent accommodations, and how to better prepare families for bringing their babies home.”

Graham’s Foundation: How much did you know about clinical trials before having a preemie of your own? Do you think your level of understanding was greater than that of most parents of preemies?

Holli: “As a nurse who worked in two large university hospitals I felt I had a better understanding of clinical trials than most other parents. I had already seen the other side of clinical trials as a nurse. I never imagined I would be asked to have my child be in trials and it was very scary at first.”

Graham’s Foundation: Were you offered the chance to participate in your NICU or did you find the clinical trials on your own? If your NICU presented the opportunity, what kind of information did they give you? Did it feel sufficient?

Holli: “The NICU we were in did a lot of research. They presented all the information and gave hand outs  Any time I had questions the lead researcher would come and talk about them with me.  I was actually asked by a Fellow from the Level 4 NICU nearby if he could come and talk to me about being a parent in the NICU and medical decision-making as a parent. We were given a parent packet on each study that we participated in and it included who the researchers were and how to contact them if any questions weren’t answered. I felt it was sufficient information, but as a nurse I understood more of what was going on. My husband normally had a lot more questions than me and at times he felt overwhelmed by the information being given.”

Graham’s Foundation: Were you ever worried about the potential negative impact of drugs or treatment on your preemie? What helped you accept the potential risks?

Holli: “Every decision we had to make while Justin was in the NICU seemed terrifying.  In the end, it was nice to know that we weren’t just helping Justin, but also all the other babies born extremely early. I asked numerous questions and made sure I was at the NICU to discuss Justin’s care with those caring for Justin. Working as a team was very important.  Knowing the benefits and the risks helped me decide to participate.”

Graham’s Foundation: Ultimately, why did you choose to have your preemie participate? What do you think, if anything, might help other parents feel more comfortable allowing their preemies to participate in clinical trials?

Holli: “Knowing that these were the newest options and the risks of remaining on the vent as well as the risk of ROP made me decide to give Justin the best chance and participate.  As far as the transfusion study, I felt we would help other preemies if it could be determined whether fewer transfusions led to better outcomes.”

Graham’s Foundation: Has there been any follow up or information passed on about the clinical trials after your preemie left the NICU?

Holli: “We are still in NICU follow up period. The team will follow Justin for 2 years.  We will never know if Justin received the medications or not but I’m hoping we will hear the outcome of the research studies.”

Why Consider Being a Part of a Clinical Trial

Clinical research has improved children’s health outcomes in so many areas, from pediatric cancer treatments to interventions for premature babies but there is still so much more to learn and a lot of misunderstanding among those who might benefit from or further clinical research. What follows is an outline of parent-focused information designed to help mothers and fathers of preemies understand what clinical trials are and why they are so vital to bettering future outcomes.

Many medicines, medical devices and treatments that are routinely given to children, including preemies, haven’t been tested in babies or children. Just for perspective, children receive medicines at nearly half of all medical visits but 70% of those medicines have only been tested in adults and some have not even been approved by the Food and Drug Administration (FDA) for use in children.

Infants and children are routinely prescribed medicines and treatments based on what works in adult patients. This off-label use of drugs and devices is frequently effective, but simply adjusting an adult dose is guesswork, not science. This method of treating children ignores the fact that children’s brains and bodies are still developing and that a child’s body may simply process medicines and treatments differently.

Studies that focus on improving clinical care in infants and children help researchers develop treatments, drugs, and devices specific to their needs. While it’s only natural that parents and caregivers – particularly those responsible for the sickest children – will have questions, concerns and even fears, without research that involves the children themselves there is no way to find the best treatment options for them. 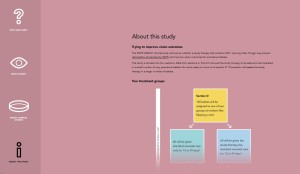 One clinical trial currently enrolling preemie participants is Shire’s ongoing ROP Study, which is examining whether introducing a medication which replicates a growth factor that is a natural part of the intrauterine environment could prevent ROP. Another upcoming trial being conducted by Nutrinia involves a drug to help promote the growth of the GI tract in preterm infants, allowing them to better tolerate enteral feedings (http://www.nutrinia.com/?page_id=2156). If either trial ultimately proves successful, the impact will be huge not only among the preemies in the studies but among the preemie population as a whole moving forward. 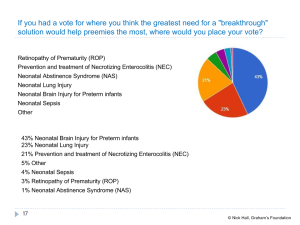 Parents and caregivers of preemies presented with the opportunity to participate in clinical trials obviously need to weigh the risks against the potential rewards, both individually and as part of the larger community of premature infants and children. But recent studies have shown that opting into research (versus taking part in only standard care) is safe.

Researchers at the University of Pennsylvania found that even extremely premature infants who take part in clinical trials don’t have worse outcomes than preemies who don’t take part in research. Researchers followed 5,000 preemies born between 22 and 28 weeks gestation and found that those who participated in trials did not have additional complications.

“Neonatology is a relatively young field, and many therapies that are commonly used in preterm and sick infants have never been tested,” Dr. Elizabeth E. Foglia from the University of Pennsylvania told Reuters Health. “The only way we can know with confidence that a given therapy works in our patients is by performing well-designed and appropriately regulated randomized controlled trials. These findings demonstrate that the practice of performing randomized controlled trials in extremely preterm infants is not detrimental to trial participants’ outcomes.”

*A significant portion of those of participated were from the USA, Caucasian, female, married or in a domestic partnership, and between the ages of 25-34.