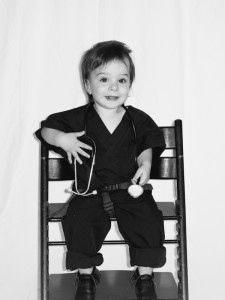 Today’s guest post and photo are contributed by Heather Graham of momknowsjack.com.
With cold and flu season steadily approaching, most pediatricians would agree that isolation is the best prevention when it comes to your premature baby. The more you can limit your little miracle’s exposure to the general public; and coinciding germs, the better. Even limiting visitation with friends and extended family members, which may seem extreme to some people; can help prevent your baby from being re-admitted to the hospital after their NICU discharge.
When my son Jack was born at 28 weeks gestation, we were advised by his NICU doctors and nurses to do just that. We kept him on a ‘lockdown’ until around the time of his first birthday. He didn’t see the inside of a grocery store until he was nearly 11 months old. My Husband and I were very fortunate to have the support of our loving friends and family during that difficult time period. We had very few visitors during that time, and everyone that did come and visit adhered to my strict germ-free policy. If you were sick, had been sick, had been around someone sick, you were not allowed to set foot in my house, and you had to be up to date on your whooping cough vaccination. No one got near the baby without washing and drying their hands completely.
Children under a year old are obligate nose breathers, which means when their little noses get congested, they can’t breathe well, making feeding difficult and uncomfortable for them. They can quickly become critically ill, requiring re-hospitalization. According to an article published by healthychildren.org “A baby born weighing less than 3 pounds, 5 ounces (1,500 grams) has almost a 40% chance of being rehospitalized during the first year of life.” The same article also states that “Respiratory infections are the most frequent cause of hospital readmission among NICU graduates.”
As an only child, Jack had very few encounters with other small children; and my elementary school-age nephew wore a mask when he was in direct contact with his baby cousin, up until Jack turned 9 months old. One might argue that such extreme measures would hinder my child’s normal growth and development, and do more harm than good to his developing immune system; when just the opposite has proven to be true. Jack is 16 months old and has only now, as I write this, of course, come down with his first cold. Jack’s social skills have been measured and marked as above average by several different qualified professionals.
One might also argue that vaccination during cold and flu season is enough to protect your high-risk premature infant, but that’s not true. While your baby resides in the neonatal intensive care unit the staff and parents take extra precautions to help prevent the spread of viruses. Why? Because the best defense, as the saying goes, is a good offense. If everyone would do their part to help protect their communities during cold and flu season, by regularly washing hands, covering coughs, staying home if you’re sick, or if your child is sick; and wearing a mask if you have to go out in public while you’re contagious, you will be doing a great service to help protect those with underdeveloped or otherwise compromised immune systems. Everyone needs to take responsibility for themselves. What is a harmless common cough and stuffy nose to one person, could be potentially life threatening to another.
If you are wondering how to help prevent your NICU graduate from coming in contact with viruses via their siblings here are a few suggestions.
If you are unable to keep your child at home during the duration of cold and flu season due to work or other conflicts thereby forcing you to place them in daycare, make sure your child care provider is aware of the potential health risks associated with premature infants. Ask questions, and voice any concerns you might have about the daycare’s policies and procedures regarding cold and flu viruses.
It is important to note that while you cannot control the environment outside of your home, you can to a large degree, control the environment within by remaining vigilant. Staying on lockdown during the winter months will not make you a popular person among family and friends, and being a germ freak won’t either. The only people who will truly know your struggle, are those who have lived it. You may have made friends with the parents of your child’s NICU bunk mates, and you can find solace in those relationships. Though you may be isolated this winter, you are not alone. The internet is a wonderful tool right at your fingertips, use it to connect with large networks of different NICU parents.
Sources: healthychildren.org/English/ages-stages/baby/preemie/Pages/Common-Reasons-for-Rehospitalization.aspx
Categories: Life After NICU
Tags: 28 weeks, how to help preemie parents, tips for preemie parents