We’re excited to announce we’re honoring Dr. Richard A. Polin at our upcoming ‘Tinis for Preemies event on Wednesday, November 7th at The Upper Story by Charlie Palmer in New York City.

Dr. Polin is the William T. Speck Professor of Pediatrics at Columbia University Vagelos College of Physicians and Surgeons and has been the Director of the Division of Neonatology at NewYork-Presbyterian Morgan Stanley Children’s Hospital since 1998. He has received numerous awards and accolades for the skill and devotion he demonstrates as a practitioner and has advanced neonatal care immeasurably through his academic work, which includes over 200 original papers, 20 books, and more than 200 abstracts in the field of neonatology.

“Every year we recognize someone who has dedicated their life to improving outcomes for preemies and families,” said Graham’s Foundation president Nick Hall, who founded Graham’s Foundation with Jennifer Hall after they experienced the birth of twins at just 25 weeks before facing the trials of the neonatal intensive care unit and the loss of one child. “In doing so we aim to raise awareness of not only the impact of premature birth, but also the need to increase research into improving outcomes for future preemies and families. Supporting people like Dr. Polin is crucial to the continuing evolution of preemie care.”

at The Children’s Hospital of Philadelphia, where he held the positions of Director of the Housestaff Training Program, Assistant and Associate Physician-in-Chief, Academic Coordinator of Pediatrics, and Acting Director, Neonatology. Temple University’s Medical School named Dr. Polin its outstanding alumnus in 1995. In 1998, Dr. Polin returned to NewYork-Presbyterian Morgan Stanley Children’s Hospital as the Director of the Division of Neonatology and Vice Chairman of the Department of Pediatrics.

In 2005, he received the Physician of the Year Award both from New York-Presbyterian/Columbia University Irving Medical Center and NewYork-Presbyterian Morgan Stanley Children’s Hospital, Division of Nursing. In the spring of 2006, Dr. Polin received the National Neonatal Education Award from the American Academy of Pediatrics’ Section on Perinatal Pediatrics, and in 2017 he was inducted into the “Legends of Neonatology Hall of Fame.”

“We are proud to be able to honor Dr. Polin and share his work with a broader audience at this year’s ‘Tinis for Preemies,” Mr. Hall said. “What really sets him apart from other doctors and researchers is his focus on educating neonatology professionals so that innovations in the NICU can spread farther and more preemies can benefit. We are so grateful for this opportunity to say thank you to Dr. Polin on behalf of parents of preemies everywhere.”

To learn more about the Graham’s Foundation’s 2018 New York City ‘Tinis for Preemies evening, to buy tickets, and for sponsorship information, visit https://www.grahamsfoundation.org/events/tinis-preemies. 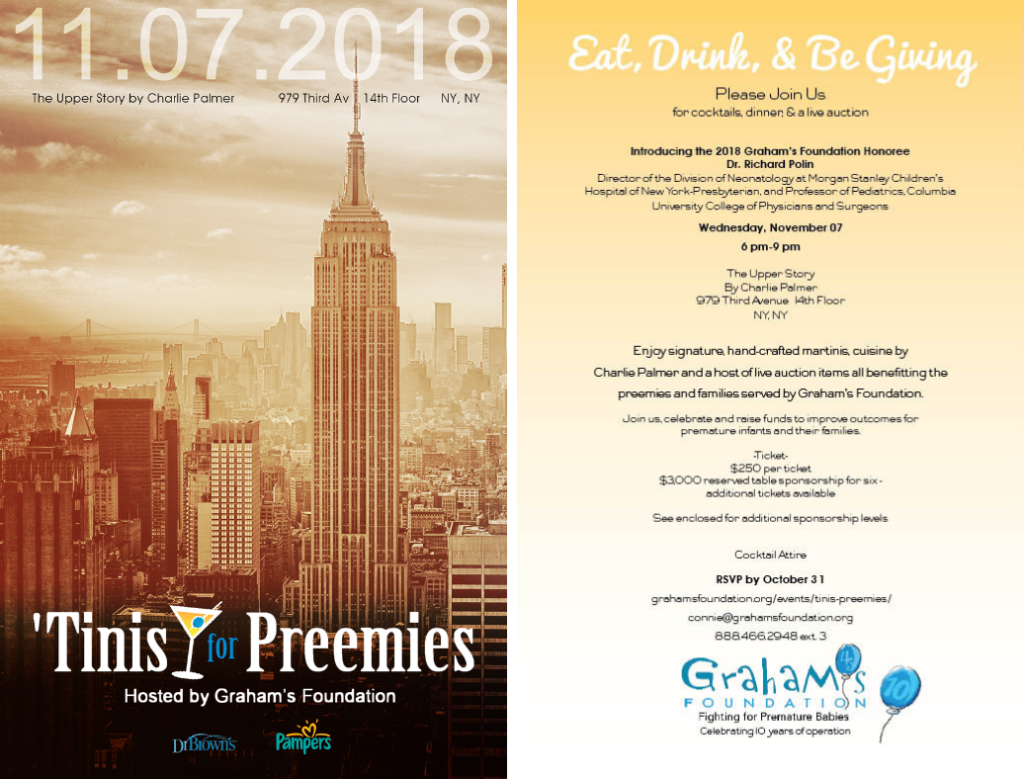