We had been trying to start a family for about 2 years. We had been pregnant once before and miscarried it was one of the hardest times in my life. Then Easter 2011 we found out that we were pregnant again. At first we hesitated to tell our friends and family till later on but eventually we decided to share the great news.

First off, nothing about my pregnancy was normal. I was diabetic and had high blood pressure. I had like 5 different doctors and felt like I had an appointment every week from the time I hit my second trimester. Anyways, I remember that day like it was yesterday. I was 30 weeks pregnant and we were on our way to our church group we go to every Wednesday at a friend’s house. I got a Venti Pumpkin spice latte from Starbucks because that’s what I was craving. We got to group, had a great discussion then it was almost time to leave. They were about to pray and all of a sudden I had to go to the bathroom, my water broke as I went to the hallway. I went and got my husband and told him we had to leave then and now. 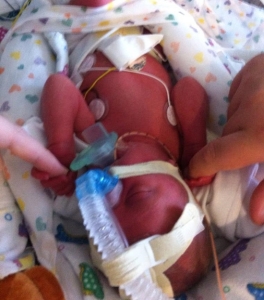 Yes my water broke at someone’s house while at a church function. We all laugh about it now. That phone call to tell that friend was awkward enough only to realize I called the wrong person and left a voice mail. LOL!

We headed to the emergency room, they tested me to see if my water had broken and it came back positive. They said that it was a false positive and send me home. This turned out to be a good thing because I got to sleep in my own bed one more night. On 10/11/12 ( cool right? We always say he wanted a cool birthday) I got up the next morning, clocked into work, and about lunchtime I started cramping horribly. My husband called and asked how I was and I told him.

He called my OB and we went in. The doctor realized that my water really had broke and admitted me into the hospital. At this point reality really hadn’t hit yet, the fact that a under developed little boy was going to make his appearance in just a few hours. My husband called all our family and we were in a room within an hour. They had no time to give me an epidural or even a Tylenol. I was at a 4 at 2 in the afternoon and by 5:03 Dusty was here. I remember thinking please baby just scream then he finally did. All of a sudden what felt like a very large room was packed with my doctor all his nurses and the Neonatologist and all his nurses. I realized how scary this all was.

He was so tiny. He was 4lbs 9oz and 17 and ¼ inches long. I remember getting up to go see him in the middle of the night praying that he would be all right. I had no idea of the journey that was about to be in our new future. He had to have a CPAP and 2 lines through his belly button to monitor his blood pressure. We weren’t allowed to do anything but hold his little hands for the first week of his life.

On day 7 we finally got to hold him in our arms. A day I will never forget. A few days later we discovered that he had 2 stage one brain bleeds. This was scary. Eventually they healed up and our next obstacle was learning to take bottles and monitor his blood pressure. After they finally got his blood pressure normalized he started to learn how to eat from a bottle. This was hard. When we first started he would turn blue and that was the scariest moments of my life. When they changed him off breast milk and put him on formula he did much better and after 47 days of having a second home at the NICU. We started our journey home with our little man.

If you’re in the NICU now I can tell you that graduation day from the NICU is the most beautiful AND the scariest day of your life.

So where is Dusty now? Well he’s walking and babbling and completely discharged from all his therapy. He still struggles to do things at the same pace as other little ones but just like the day he was born he does things when he wants to.