Jennifer Degl is the mom behind Micropreemie.net and the author of From Hope to Joy, which chronicles her and her family’s experiences coping with a difficult pregnancy and early prematurity. Her daughter Joy came home after 121 days in the NICU and is healthy today, but like most preemies the hills she had to climb to make it home were steep. Below you’ll find Chapter 1 of Degl’s book – and if you join us on Facebook, you can enter to win a free copy of your own! 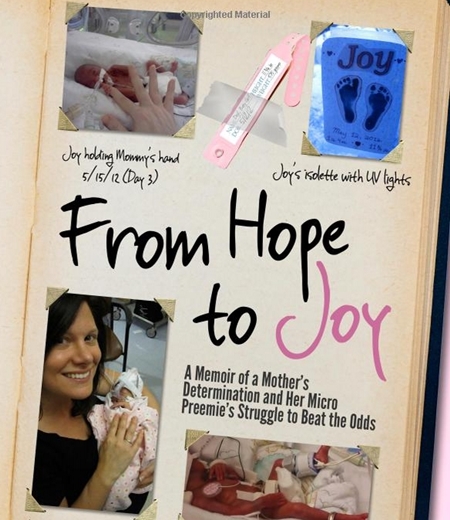 It was four o’clock in the morning when I awakened to a feeling that something wasn’t quite right. Reassured by the gentle snores of the twelve freshman girls and one sophomore helper who were assigned to my cabin, I gradually began to drift back to sleep and burrowed more deeply under the covers. I rolled over to get more comfortable and was jolted into consciousness by the wet and mushy flow of liquid that trickled beneath me. Oh no, I thought to myself. I’m losing the baby.

As an earth science and biology teacher, one of the greatest joys of my school year is our annual freshman class trip to Sharpe Reservation, a campground located in the Hudson Highlands near Fishkill, New York, about forty-minutes from where I live and work. A few other adventurous teachers and I take more than one hundred kids on this excursion every March to give them a dose of nature, and to allow them to experience life without technology. But perhaps the most important reason we teachers make the trip with our students—at least from my point of view—is that it allows them to be kids for a couple of days.

On the morning of March 14th, the students piled onto the bus for the forty-five minute trip to the campground. I usually ride on the bus with them, but this time I decided to drive in my own car. We arrived at the campground at around 11 a.m.

After we arrived, we followed the usual routine: The students unloaded their luggage, then gathered round and munched on their bagged lunches while we went over the camping rules. Next, everyone collected their belongings and made the trek to their assigned cabins. I chose a cot in the center—a better vantage point for keeping an eye on all the girls—and asked Sophia, my sophomore helper, to take the cot next to mine. One of our most reliable honor students, Sophia had been on the trip with me the previous year. Only three of the freshmen assigned to my cabin were students in my class; I didn’t know the rest of them, but looked forward to getting acquainted with them over the next couple of days.

The twelve beds for the students were arranged bunk-style: three rows of bunks flanked by a bathroom at each end of the cabin. The entire back of the cabin was lined with floor-to-ceiling windows. (There’s no need for alarm clocks at Sharpe Reservation. I’ve yet to meet anyone who can sleep once the sun rises.) Once the girls got settled in, we met with the other students and teachers to receive our activities assignments.

I was assigned to lead a short walk on a paved path to the planetarium, and then run the planetarium show with the assistance of one of the camp staff members. This particular show was about the visible night sky, and the beautiful display really got students excited about their impending night hike.

I led three groups of students to and from the planetarium before dinner time. Although I wanted to share in the students’ hike, I just didn’t feel I could manage that kind of strenuous activity—in my condition—after such a long day. My fellow teachers agreed to take my group up to the mountaintop to look for the constellations and call for owls. We first gathered round the campfire and made S’mores, and afterward I hung out in the dining hall with the small group of students who didn’t go on the night hike. Ninety minutes later, I heard the enthusiastic chatter of students and teachers as they made their way back to the dining hall. The kids were given thirty minutes to use their cell phones—the main dining hall was the only location that had cell service—and then we all went back to our assigned cabins. Lights were out by 11 p.m. I had a slight headache.

Snuggled in my sleeping bag, lying on my cot, I listened to the silence and was drifting to sleep, but my brain just wouldn’t cooperate. Thinking back on my decision, I tried to rationalize why I came on the trip. I’d been bleeding slightly since becoming pregnant with this baby, but I’d bled with all my previous pregnancies, so I thought, no big deal. I faithfully attended all my scheduled doctor visits, and my doctor never said anything about bed rest. She instructed pelvic rest, which means no sex, and told me to take it easy. In my mind, if I’m not climbing a ladder, then I’m taking it easy. But as I lay there, waves of guilt washed over me. Guilt about everything: getting pregnant in the first place, going on that ski trip even though I didn’t ski, and now coming on the student trip. My friends and family had tried to convince me not to go, and my husband, John, was adamant. Yet, I determinedly insisted on going–and I “conveniently forgot” to consult my doctor about my decision. I love this trip, and I knew she would counsel against it. Besides, I was doing well at this point in my pregnancy: I hadn’t bled for the last two weeks, so it seemed the worst was over. More guilt.

A stubborn, optimistic control-freak. That’s how those closest to me describe me. I agree with them. I also know I’m optimistic to a fault: I sometimes lose objectivity by not seeing both sides of an issue. My head was spinning. The silence in the cabin and the darkness of the night finally overpowered my thoughts, and I fell asleep.

When I rolled over and sat up, I knew with certainty that the fluid I felt was a pool of blood. I’d had two previous miscarriages. Although this didn’t feel exactly the same, I was positive I was losing the baby. In the dark, I half-walked, half-crawled to one of the bathrooms, dragging my overnight bag with me. I felt for the light switch, flicked it on, and began to hemorrhage in earnest. Blood gushed everywhere. There’s no way the baby will survive, I thought. Thirty minutes later, the bathroom resembled a slaughter house; I peeled off my blood-soaked pajama bottoms and desperately tried to staunch the flow of blood before any of the girls woke up and became frightened by the horrendous mess. What if one of the students gets up and sees this? They’ll think someone was murdered in here. Finally, the bleeding slowed. I yanked my jeans and a pair of sweatpants out of my overnight bag and, struggling, managed to pull on my jeans. There was a towel in the bathroom left by one of the girls who had showered before bed. I took it and stuffed it in my jeans, then used my sweatpants to mop the floor as best as I could.

It was pitch-dark in the cabin. I had no cell phone service, but I turned on my phone to use the faint light to help me find my way over to Sophia’s bunk. I pointed my cell phone toward her and then stood there for what seemed like a long time. I was stupefied. How should I wake her? What am I going to say to her? Finally, I reached over and gently shook her. She startled awake.

“I have to take myself to the hospital,” I said. “I think I’m losing the baby.” Then I handed her a piece of paper, a pen, and a highlighter. “Here’s the roster of everyone in our cabin. Be sure to take attendance in the morning.”

I wanted to be able to tell one of the other teachers, but there was no way to wake any of them. There was no cell phone signal, and the cabins all locked from the inside. If I were to knock on one of the cabin doors, all the students inside would wake up, and they’d be scared to death.

With my cell phone lighting the way, I left the cabin as quietly as I was able and walked the quarter-mile to my car. The security guard gave a slight wave as I drove past him—it never occurred to me to stop at the guard gate—and I drove to my hospital thirty minutes away. I realized later that the smart thing to do would have been to ask the security guard to call an ambulance. At least I should have driven to the closest hospital, only fifteen minutes away, and not my hospital. But my mind just wasn’t working properly.

Not too long after leaving Sharpe Reservation, my cell phone began working again. I hit the speed dial number for my doctor’s office and left a message that I was on my way to the hospital so she could meet me there. Then I speed dialed John. He had to call his parents—who live next door—and ask them to come to our house to stay with our three sons. I also left messages on the cell phones of two teachers who were in other cabins at Sharpe Reservation, so when they got to the dining room in the morning (where there was a cell signal), they would understand why I wasn’t there.

I drove to the main entrance of the hospital and parked my car in the driveway right in front of the doors. I got out and walked up to the front door, but it was locked. I should have known. This is a small-town hospital, and it’s pretty much the norm to lock the front doors at night. I should have driven to the emergency room. What was I thinking? What am I going to do? As it turns out, I couldn’t do much because I started hemorrhaging again. Bleeding heavily, I lay down on the cement walkway, right in front of the hospital, and almost passed out. Within a few minutes, a security guard found me lying on the cement. He opened the front door for me, and I found my way to Labor and Delivery, which was just inside the front entrance of the hospital.

Kelly, the midwife, and Dr. Gallo were waiting for me. They’d been waiting for the ambulance. “You drove your car?” cried Kelly. “You could have gone into shock with all the blood you lost.”

I think I was in shock to some extent. I had no idea why I drove my car. I was admitted, and a nurse inserted an IV in my arm. A sonogram was scheduled to determine if the baby was still alive, but I had to wait for almost two hours before the technicians arrived for the morning shift to do the test. It seemed like a lifetime. Finally, at 7 a.m., I had the sonogram, and it turned out the baby was fine. Everyone, including me, was in shock. Given the amount of blood I’d lost, it was a miracle the baby was okay. At that moment, I knew this baby was strong. Incredibly strong. I vowed right then and there to do everything possible to bring a healthy baby into this world.