What to Expect When You’re Expecting (a Preemie) 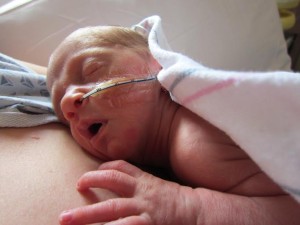 My first child was a surprise. I had recently graduated from college, finished my first marathon, and started a new job. So when my shirts weren’t fitting right and a test from the drugstore confirmed my suspicion, I panicked by obtaining just about every book about pregnancy there is.

Included in the stack was the popular “What to Expect When You’re Expecting” by Heidi Murkoff and Sharon Mazel. I read through almost all 600+ pages of it, learning about topics like sleep, fitness, nutrition, stretch marks, and heartburn.

I crafted my perfect birth plan and started collecting baby gear and clothes. I had an uneventful pregnancy until 33 weeks when I developed preeclampsia. I was hospitalized for a week, during which time I scoured my books for information about premature babies and found them terribly inadequate.

According to the National Center for Health Statistics, 12 percent of live births are premature – defined as before 37 weeks. With so many babies coming early, one would think that there would be more than a dozen pages dedicated to them in a 600+ page book!

If you are expecting a preemie (and even if you are not – most of us don’t!), here is what you can expect:

If it is likely that you will expect a preemie, most hospitals will tell you all of this. 10x as fast. Using big words and unfamiliar acronyms. When you are already stressed out. But don’t worry – you’ll catch up faster than you think!