Featured Mentor Jen: A Mom of Preemie Triplets Explains Why Connection Is Vital

Today our Preemie Parent Mentor Jen – our newest featured volunteer – is sharing her prematurity journey and talking about why it’s so important for preemie parents to connect. Does her story resonate with your? What resources were and weren’t available when your preemies were born? 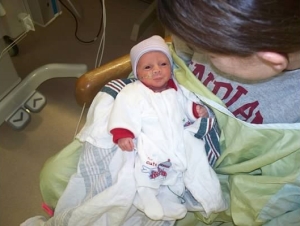 My preemie journey began the day we learned I was pregnant with triplets. I was 18 weeks along and had gone in for a routine ultrasound and surprise, I was carrying three babies, not just one. The idea of three babies was almost impossible to wrap my mind around, but I was also terrified.

My OB came down to the ultrasound room and I vividly remember him telling my husband Brian that he hoped we had good insurance because these babies were going to be born early and spend time in the NICU. His words offered no comfort or encouragement, but he was being honest and realistic and my husband and I had to accept this reality.

In some ways I feel like I had an advantage over many preemie moms because from that day on I knew the end result would be babies in the NICU, it was just a matter of how long I could carry them. I had a lot of time during bed rest to scour the internet for any information I could find on preemies and multiples. My girls are 6 now, and there were not as many great resources likes Graham’s foundation, so I was looking at everything from message boards to blog posts.

The thing that struck me was that no matter how much I research and how much I learned, in the end, there was no way to predict how long I would be pregnant and how well my babies would do. As a type-A control freak that was not an easy thing to accept. I had my mind set on 34 weeks and was determined to do everything I could to reach that goal, but my body had other plans.

After a very difficult pregnancy including three weeks on bed rest in the hospital the girls, Sarah, Lucy, and Emily were born at 32 weeks and 1 day. We were so fortunate that the girls came out breathing on their own and only need nasal cannulas for the first two days, but like all preemies that age they struggled to eat, maintain temperature, gain weight, and with apneas and bradys. They spent 30 days in the NICU which although was long and difficult was in so many ways so much better than the terrible scenarios I had imagined so I was able to take comfort in that. 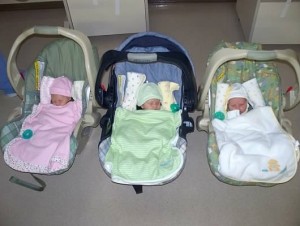 I did not know anyone else who had delivered prematurely or spent time in the NICU and I so wish I had because as wonderful as my family and friends were, they could not speak from experience, so their reassurances did not always ring true. I could have used a real person to connect to, not just strangers that posted on message boards online.

It was when I finally began to meet other preemie moms, long after girls were home from the NICU, that I really began to process and understand my experience and there was nothing more comforting than a friendly voice saying, I felt that way too. So I encourage all preemies moms to take that first step and reach out and connect with other moms who have been there and can offer support that no one else can.

Do you need that connection? Connect with a Parent Mentor who’s been there!

About The Author: Jen Hall