Finding Your Strength When the Plan Changes

Difficult roads lead to beautiful destinations; I can say that now, a year and a half later. Our NICU journey is entirely different from anyone’s I have ever met. My husband and I live in a small town on the western side of North Dakota. Our town has a critical access hospital, that is great, I mean I work in the ER there as a nurse, but one thing it does not have is a NICU. It was a beautiful summer day in August, my husband and I were winding down all the busy summer plans and just enjoying the fact that our daughter would be with us in about six weeks. We planned to finish all of our nursery and household projects before she came, being that we just moved into a new house in May. Summer is a busy season for my husband’s job, and we had four weddings that summer. Like most pregnant ladies in the summer, I was trying to stay cool and enjoy mocktails.

It was Friday night, and I was woken up with vomiting and a headache. I was very familiar with vomiting; it was like my second job from week 5 to week 17 of pregnancy. I just wrote it off and tried to rest. In the morning, it just hadn’t stopped, and I started just to feel worse. I had not had a headache like this before. I went to the hospital to be seen by my OB and get a bag of IV fluids.

There were so many things running through my head when this was happening. I was 33 weeks and 2 days pregnant, I couldn’t have my baby yet, we didn’t even have sheets on the crib. I asked myself if this was my fault. I am a working mom who runs around the busy ER all day, it has to be my fault. I am already messing up as a mom, and I am not even one yet. Then I thought, my husband, he’s got to be thinking somehow it’s his fault. Then I thought, wait, I am the medical person in the family, how am I going to explain this, so everyone understands.  It’s my job to explain the diagnoses and treatment plans. They don’t understand what severe pre-eclampsia means and what it could mean.

The looks on everyone’s face around me, they were scared. I was usually the one to comfort them in these situations. I thought about my parents that were in CA; my sister had JUST got her clean bill of health after having postpartum cardiomyopathy and how worried they must be. I didn’t realize how sick I was until everyone who knew what was going because they learned it in school (my co-workers that came to visit), looked at me like they were saying goodbye.

The doctors and nurses were able to get my blood pressure down in the bigger hospital. The day they were considering discharge, the headache came back. It felt like someone was banging my brain on my skull. I told the nurse about my headache, and my blood pressure was elevated again. My OB, the neonatologist, neonatology nurse practitioner, and nurses came in to explain to my husband and me that we were going to have the baby before something worse happened to me. They explained how she could have to be intubated, IVs, and how the NICU would work.

Early the next morning, our sweet 4 lb baby Avery arrived. I don’t remember the delivery. At one point, I know my blood pressure dropped as well as Avery’s heart rate. I remember the one nurse said, you’re going to c-section, or you’re going to need to push in the next few minutes. I knew I was only at a seven a few hours ago, so the whole pushing thing probably wasn’t going to happen. Avery’s little head was crowning, and there she was. She knew she needed to come out to save her momma’s life. The next hours were rough for me. I was on bed rest due to the magnesium drip and everyone got to see my baby but me. 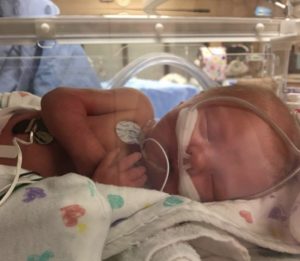 My husband, her grandparents, aunts, and uncles, got to go introduce themselves to her. The only person she really hadn’t met was her mom. With lots of convincing and negotiating, the doctor and nurse finally allowed me to be wheeled in to meet her officially. I could only touch her tiny little body with my hand but it was the greatest moment ever. It was a short visit, but I got to meet my daughter. 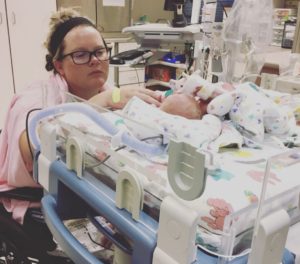 Avery did great, no intubation, just oxygen, bili lights, and feeding tube. She was also closely watched because she had magnesium in her system. The doctors and nurses kept telling us how Mag babies are supposed to be extra sleepy, but our daughter is feisty. Days in the NICU weren’t always easy. It was four days until we were able to hold her and only one parent per day. Like many NICU babies, Avery had her ups and downs, not gaining weight, not passing her car seat test, and having spells of hypoxia and bradycardia. It is not always an easy journey when you take three steps forward one day and two steps back the next.

You do not know how much you love your pillow until you do not have it for 35 days. Avery was in the NICU for 30 days and we were there a few days before we had her. Lucky for us we were able to stay with my husband’s best friend, once I was discharged from the hospital. My husband and I did not go home at all. His work made it work, and I was on maternity leave. We bought a lot of new clothes, tried a lot of restaurants, and found a few new TV shows. Our days were scheduled around the times they rotated Avery, and rounds which then graduated to feedings. We tried to breastfeed when we could, but eventually, a bottle and formula was introduced for weight gain. Which yes, meant I exclusively pumped, but that’s another whole story. 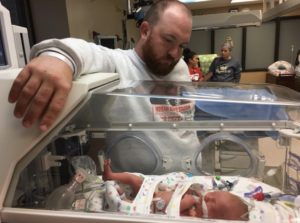 The hardest part of being a NICU mom is leaving your baby at the hospital every night. Thank the lord for the great NICU nurses, or I don’t think I would have ever left. A lot of new moms do not get sleep because they are up with their baby. NICU moms don’t sleep because they are up waiting for the phone to ring that something happened and they need to come to the hospital or having to pump to get their milk supply. Being 4 hours away from home wasn’t ever easy. However, it did always feel like we were visiting, so I always told myself, this is temporary. Having a NICU baby gives you the strength that you did not know you had. Lean on those around you, sit with your baby, read them a book, be around them as much as you can, there’s no one stopping you. On the tough days, I would go on Pinterest and read myself inspirational quotes and look at other NICU babies and their stories or look up #NICU on Instagram. That is how I found Graham’s Foundation and had their support. It helped me to see real people and babies that were able to get through this tough time. Find strength in other’s experiences. And just know that one day your 4 lb preemie is going to be an 18-month-old toddler yelling at you for their bottle and trying to jump off the couch.