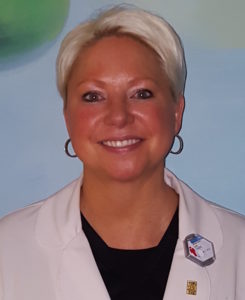 Graham’s Foundation (GrahamsFoundation.org), the global support organization for families facing the challenges of premature birth, will honor Amy Thorpe Wiley, M.Ed., CCC/SLP, at its upcoming ‘Tinis for Preemies event on Wednesday, June 12, at the Carranor Hunt & Polo Club in Perrysburg.

Ms. Thorpe Wiley has been a pediatric speech language pathologist at ProMedica Toledo Children’s Hospital since 1994. She specializes in pediatric feeding and swallowing disorders and craniofacial anomalies. She is also an adjunct professor at the University of Toledo where she guest lectures and serves as a clinical supervisor. Ms. Thorpe Wiley has received numerous awards and accolades for the skill and devotion she demonstrates as a clinician and educator. “Each year we recognize someone who has dedicated their life to improving outcomes for preemies and families,” said Graham’s Foundation president Nick Hall, who founded Graham’s Foundation with Jennifer Hall after the birth of their twins at just 25 weeks old. This was followed by spending months in the neonatal intensive care unit  and the loss of one child. “Through ‘Tinis for Preemies, we aim to raise awareness of not only the impact of premature birth, but also the need to increase research into improving outcomes for future preemies and families. Supporting leaders like Amy Thorpe Wiley is crucial to the continuing evolution of preemie care”

In 2006, Ms. Thorpe Wiley obtained a US Methodology patent and is the inventor of the Bionix Controlled Flow Bottle which is used worldwide and allows infants to feed at their own pace. She has held many positions on the Ohio Speech Language Hearing Association’s (OSLHA) Executive and Legislative Councils, including president in 2007. She was awarded OSLHA Fellow of the Association in 2008 and is receiving Honors of the Association in 2019. Ms. Thorpe Wiley was nominated by the governor’s office to serve two consecutive terms on the Ohio Board of Speech Language Pathology and Audiology and served as board chairman from 2012-2015. She currently sits on the American Speech-Language-Hearing Association Council for Clinical Certification.

In 2016, Ms. Thorpe Wiley was nominated for the Albert E. Dyckes Ohio Hospital Association’s Health Care Worker of the Year Award for her outstanding service. In addition, she is currently
the board president of the Susan G. Komen Organization of Northwest Ohio, raising awareness and funds to help underprivileged men and women facing breast cancer. “We are proud to honor Ms. Thorpe Wiley and share her work with a broader audience at this year’s ‘Tinis for Preemies,” Mr. Hall said. “Her passion for helping others extends to many organizations in the Toledo area, allowing her to share her insights and enthusiasm in addressing a variety of issues. We are grateful for this opportunity to say “thank you” to Ms. Thorpe Wiley on behalf of parents of preemies everywhere.”

To learn more about the Graham’s Foundation’s 2019 ‘Tinis for Preemies evening, to buy tickets, and for sponsorship information, visit GrahamsFoundation.org/events/tinis-preemies or call 888.466.2948 ext.3.