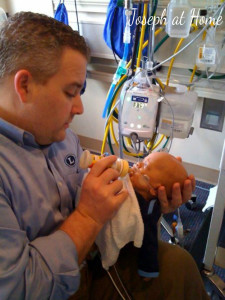 Having a preemie is often unexpected. For some, it is their entrance into parenthood. For others, they were a parent before having a preemie.

I asked my husband, Scott, what it was like being a first time father while in the NICU after the birth of our 24 week twin boys. He described the difficult days after birth and the mixture of emotions of caring for me after an emergency c-section but also the care and concern for our boys whose lives were extremely fragile. He described the emotions of being a first time father – the pride of being a new father but also being terrified of having two very, very sick premature babies.

Scott also talked about making sure dads care for themselves so they can care for their wife and new baby. The morning after our boys were born, Scott awoke after a long night attempting to sleep on the hospital couch while caring for me and he could not move his neck. He was miserable and had to leave me for a little while so he could visit the chiropractor. While he felt terrible leaving me for a few hours, he knew he had to take care of himself so he could care for me, Joseph, and Campbell.

Scott’s first Father’s Day was extremely bittersweet. While we celebrated because we had just brought Joseph home days before after a 228 day NICU stay, it was also a somber day as we should have been celebrating with two boys. Our son, Campbell, had passed away just 23 days after their birth. Father’s Day has always been a special day to us as it marked our first holiday at home and not in the NICU.

To all dads – dads who have children on earth and children in heaven – Happy Father’s Day.