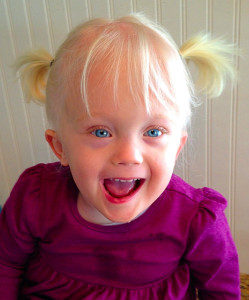 Today’s guest author, Jessica, can be followed on her personal blog.

I will never forget that day.  No, I am not referring to the day my 24 week preemie miracle, Morgan Grace, was born. Although the events of her birth day, the sudden contractions, my water breaking, an ambulance ride, scrubs being thrown at my husband as I was whisked into an emergency c-section, and listening to the doctors and nurses revive and wheel my baby girl off to the NICU are still equally as vivid in my mind.  Six days later, Monday, August 27th, 2012, that was the day. The day the neonatologist walked in her NICU room after a routine head ultrasound to tell me that she had suffered a grade III/IV intraventricular hemorrhage (IVH/brain bleed) and had developed hydrocephalus. I was devastated and couldn’t believe it, she was doing so well and amazing the doctors and nurses every day, how did this happen?

He pulled up her ultrasound and all I could see was the black, her cerebral spinal fluid that had built up and covered what should have showed her brain. I can still feel the lump that formed in my throat as I fought back tears to try to focus on what he was telling me. I remember him saying the future is unknown, she may have severe cognitive and motor delays, she may never walk, she may never talk, it was probable she would have Cerebral Palsy, and how he not so eloquently described her brain matter as looking like swiss cheese. The brain damage could not be undone and only time would tell the impact. The fluid build-up, however, needed to be closely monitored and likely she would need surgery to place a temporary drain and later, when she was bigger, a permanent shunt.

He left me alone in her NICU room, a room I vowed not to shed a tear in for the sake of being strong for my daughter, so instead of breaking down I turned to Google for inspiration. I searched every blog, article, informational site and story I could find. Unfortunately I found more horror stories of shunts and the revisions they required than I did about hydrocephalus resolving on its own. I read about brain bleeds and children with Cerebral Palsy and developmental delays. I tried to remain positive but mostly the internet was painting a grim picture of my daughter’s future.

Fast forward a couple of years and unfortunately her story does include many of the horrible things I read that day. She had surgery to place a temporary drain and later when she got bigger a shunt placed. We have been through several scary shunt revisions, visits to the emergency room, painful recoveries and now she has two shunts to control her hydrocephalus. She has developmental delays and been diagnosed with the “horrifying” Cerebral Palsy.  She has cried through more physical and occupational therapy sessions than I can count, to the point where the frustration almost made us give up on it. We constantly overanalyze every look, mood, sickness and action that might look semi-related to a shunt malfunction.   I could write for days about all of the nuances and odd things she has encountered and we have learned related to living with Hydrocephalus. But those are the bad things.

You get through the bad times and when you do, it makes the everyday milestones that most parents take for granted seem extra special. I think we tend to write and blog the horror stories about the hard times and unfortunate situations (the shunt revisions & diagnoses) because writing is an outlet and we share our stories when we are seeking help, feedback and guidance. No wonder that day I spent on Google a couple of years ago left me so frightened.

So despite her brain bleed and hydrocephalus, here are just a few things I forgot to write about Morgan and the things I hope some NICU mother out there today reads and finds inspirational. She was breathing on her own by 32 weeks gestation and has no long term lung or heart damage. She eats well, did not come home on a feeding tube and gained weight consistently despite being a micro preemie. She had stage 2, zone 1 Retinopathy of prematurity (ROP) and signs of pre-plus disease which resolved on its own without requiring surgery, she does not require glasses and her vision exams so far have been
great. She has no hearing issues. Her fine motor and cognitive skills are now “caught up” at 2 ½ years old. She walks with a walker and we have been told by therapists and neurosurgeons that she will walk and even run someday soon. She now looks forward to her physical therapy sessions when she gets to go “play with Tonya”. She counts and says her colors in both English and Spanish.

Even though she officially has a diagnosis of Cerebral Palsy, this diagnosis has a very broad range and I cannot even tell that her right side has slightly reduced muscle tone let alone others seeing this. I am guessing being a pro athlete might not be in her future but she loves to read and sings a great rendition of “Happy Birthday” and “Twinkle Twinkle Little Star” on her toy piano. She is stubborn and sassy. She has a smile and sweet little voice that will make your heart melt and her presence lights up the room.

I would be lying if I said that hydrocephalus and shunt malfunctions weren’t scary but I have learned to look at her shunts as enablers instead of disabling. They enable her to live her life and function just like any other child.