What Independence Day Can Mean to Preemie Parents

One year ago, Independence Day came one day early for our family. On July 3 of 2013, we unhooked the monitors, bagged clothes and thermometers, scored a few free tiny diapers, and finally strapped our 32-weeker – who had then reached 38 weeks – into his car seat.

We exited the NICU like it was a parade: waving and smiling at the nurses and doctors who had helped us along the way, rolling our cart laden with all the baby gear we had accumulated like it was a parade float, and proudly marching our baby outside for the first time in his life. 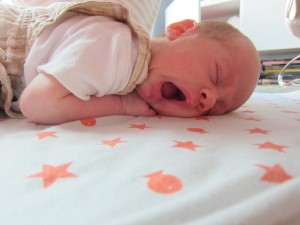 Our preemie was less interested than we were in this victorious moment: he slept the whole way home. As a family complete we spent the rest of that day sleeping, changing diapers, feeding – the same things we did in the NICU, but this time without wires and monitors, beeping noises, and nurses looking over our shoulders. Even though the routine really hadn’t changed much, we felt free.

The next day, while everyone else celebrated Independence Day with picnics and fireworks, we celebrated with snuggling and kangaroo care and naps. This year’s celebrations won’t be as serene, but I am still spending much of the day savoring the happiness and freedom we are so lucky enjoy with our preemie.