Interview With a Micro-Preemie: A 24-Week Newborn, Now All Grown Up, Shares Her Early Life

We’re always thrilled to be able to share stories of preemies who are thriving but more often than not, the stories we share come from parents. Today we want to share a different kind of story – one shared by a preemie in her own words. We spoke with Eleanor R., who was born at only 24 weeks gestation. In Part I of our two-part interview, she talks openly about about the circumstances surrounding her birth, her early life, and her family’s time in the NICU. 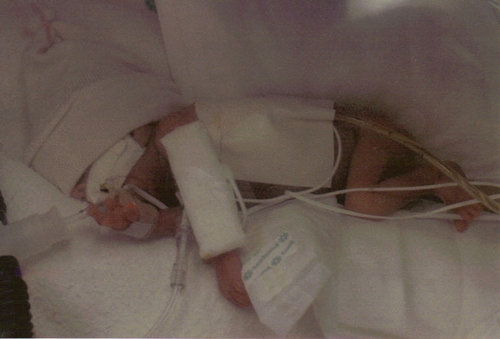 Tell us something about the circumstances surrounding your birth. How many weeks early were you born? Did your parents or their doctors find out why? How long were you in the hospital?

After years of trying and false starts, my parents were overjoyed but cautious to be pregnant with me. Everything was going well until my mother was diagnosed with preeclampsia and nearly had a stroke. After arriving at Georgetown University Hospital, I was born at 24 weeks gestation via cesarean section. I was 1.3lbs at birth and in an incubator for my stay in the NICU.

My parents did not know what to expect. I was due around mid-June but was born in on the first day of March. I was finally allowed home on 22 July after five months in hospital. My father remembered that he was not allowed in the operating room and had asked a priest baptized me because I there was a high chance that I would not survive. My mother was conscious long enough to touch my foot before the doctors whisked me away to the NICU.

Treatment for early prematurity has changed over time. What, if anything, do you recall your parents telling you about your early days in the hospital and how life was when they took you home?

The NICU was a very different place in the 1980s. Some of the procedures which I underwent have since been deemed unnecessary or even dangerous. I recall my parents explaining my procedures and the scars that resulted. When I was thirteen days old, I had to have patent ductus arteriosus (PDA) litigation. The doctor told them my lungs were about the size of postage stamps. I have a scar that runs from my shoulder blade to my underarm but I hardly notice it. I also have chest tube scars about an inch wide on each side on my chest and three “cut down” scars on my arms from where IV lines were inserted.

People often ask me about those scars and I just reply that I’ve had them from infancy. I’ve never thought of removing them surgically and do not take pains to cover them up because I consider them a part of me. I also have a bump on my forehead from an IV line that “blew” which I find easy to ignore, similar to my attitude about my other scars. I surprised to learn that I was featured in a feeding tube instruction video for the NICU. I imagine the video has since been replaced with more updated information but I hope the video was useful to the NICU nurses having to insert feeding tubes into those tiny babies.

I had no shortage of visitors in the NICU. My parents visited every day but their parents also visited frequently. Other relatives were not allowed in the NICU and had to wait until I was discharged to see me. All four of my grandparents have passed away and the photographs of them holding me are precious to both me and my parents. My grandmothers used to call me their “miracle baby” and tell their friends about me. I received little knit hats from family and friends who could not visit in person. My parents mentioned how nice it was to know that people were thinking of our family.

My parents bonded with other parents with babies in the NICU and I think the shared experiences were of some comfort to them. They’ve even kept in touch with a few of the families and check on the progress of their children. A few weeks before I was supposed to come home, I contracted pneumonia and my parents were frustrated by the delay. At home, I was on supplemental oxygen until I was about nine months old and needed a heart monitor in my crib. A nurse showed them how to set up the machine but my parents soon learned how to look after me at home with minimal help from medical professionals.

What do you remember, if anything, from early childhood that relates to your prematurity, e.g., more doctors visits, therapies, special food, etc.?

I definitely remember being in pediatricians offices fairly often for every cold and bump on the head. Luckily, I did not need any other surgeries beyond a tonsillectomy when I was seven and my wisdom teeth extracted at eighteen. I had needed high calorie formula as an infant but was a fussy eater not unlike most babies. I had physical and occupational therapy until I was 18 months and again as a toddler because I was having difficulty with small motor skills. My parents were concerned that I was not reaching milestones at the usual time.

My mother was worried I would never have hair, walk, or talk. But I can move and speak without difficulty and have an abundance of hair from my father’s side of the family.