I have always been fascinated by preemie’s personalities and how much they reveal so early on in life. Some are tagged as “fighters” while others are “sweet” or “sassy.” When my 34-weeker daughter was in the NICU, she constantly tugged at her feeding tube. It came out almost daily – even after taping and re-taping it to her cheek. The nurses described her as “persistent,” a trait that still describes her almost five years later.

As soon as she could get around the house by crawling, she learned to open the cupboards and empty the contents. If she saw something that she wanted, she pursued it and would not be distracted by anything else. I installed a supposedly childproof lock on our refrigerator because she had a habit of prying it open and leaving it open, gorging on anything located on the bottom shelf. The lock did not deter her. She would pull and pull and pull until the adhesive would finally give.

We went through at least three refrigerator locks. It was the same story with the pantry door. Once she was tall enough to stand and open the door handle, I would find bite marks on bread bags and cereal bars and sleeves of crackers. Again, no lock could outlast her fierce determination. 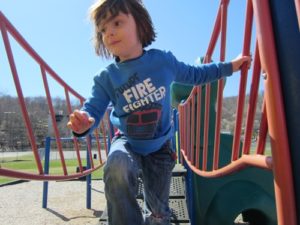 A few weeks ago she asked to enter a kids’ race. It was one mile long – three laps around a large grassy field. I had my doubts that she could complete it: she often complains when we walk more than a few blocks, and hiking with her is a lesson in patience as she picks up every stick and rock along the way. Nevertheless, she wanted to race so I let her enter.

She ran almost the entire first lap before slowing to a walk. I wondered if she would step off the course at the finish line; maybe she would be satisfied with one lap? No, she plodded past the line and started running again, catching up with another kid on the second lap. By the third lap, she was quite tired and walked most of the way but she finished! The same persistence that kept the nurses busy replacing her feeding tube now carried her through a tough challenge.