MATT: A Film About How Far One Preemie Can Go 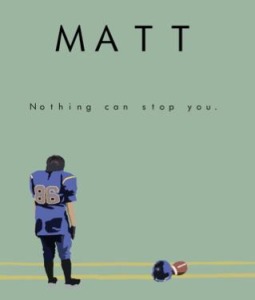 When Matthew Tapia was born, 3 months premature just a mere 1.5 pounds, he was given just a 5% chance of survival. Doctors said that if he did make it, he’d likely never speak or walk.

It’s a story that many reading this will have heard before, if not in their own journeys from their own doctors then in the stories shared by parents of preemies here and on our Facebook pages.

In MATT: The Film, however, the story has reached a climax. Eighteen years after he defied the odds by staying alive, Matt is a senior at Santa Monica High School – positive, spirited, and stubborn enough to keep defying the odds. Matt is on track to graduate high school on time and attend UCLA next year, but that’s not all.

Heading into his senior year, Matt took advantage of an opportunity offered to him by a brave coach and some open minded kids, and joined the football team. He didn’t miss a practice all year. For a kid who battled a stigma of mental illness his whole life, he had now found a band of brothers he can call family. 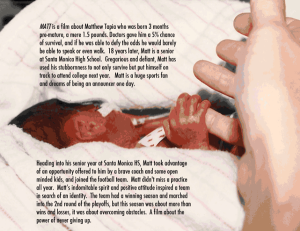 It’s a film about the power of never giving up, and a must-see for new parents of preemies who are looking for some hope to hold on to as they wait to see what the future holds. We’ve all heard the odds… odds of survival, odds of meeting certain developmental milestones on time or at all… but maybe it’s time to stop thinking about odds.

Here’s how director Seth Shapiro put it in an interview about the film:

What I really hope people take away from “Matt” is the idea, “Don’t let other people’s expectations be yours.” In the case of Matt, everyone was so happy that “he got in the game.” They thought that would be the greatest moment of his life. But to Matt, it was really “sort of a disappointment.” He wanted more. He wanted to “run to the pylon and score that touchdown” that he’d always dreamed about. To him, just taking a knee wasn’t enough, or as exhilarating as everyone thought it would be for him, including his dad. I think so often, we live to the expectations of others and what we should be accomplishing. We live to the bar they set for us. In reality, we should live up to our own bar, and in that “room without a roof” that I keep hearing Pharrell sing about on my radio. I loved what Kevin Person said towards the end of the film: “What did I learn from Matt? Anything is possible… If you want to play football or do anything, you can do it and nothing can stop you.” And how true that really is. So often we’re our own worst enemy in derailing our dreams.

As MATT: The Film makes clear, you never know how far a preemie will take you!

Check out the trailer: