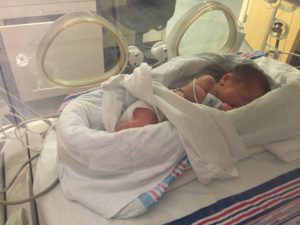 I am very excited to be partnering with Graham’s Foundation. My son Carter was born at 10 weeks premature, at 30 weeks and 1 day. He was 3 pounds 11 ounces and was 16 ¼ inches long. I was terrified about whether he would be okay and what implications this would have for the rest of his life. While in labor, the nurses kept telling me things like “You won’t be able to hold him because he likely won’t be able to breathe on his own” or “You likely won’t be able to see him for a bit while the NICU team assesses his health.” That was far and away the scariest day of my life.

Our friends and family were so incredibly supportive and did everything they could to comfort us while we waited to see how Carter was doing, but we knew no one who had been through this. I felt very scared and very alone. We were very, very fortunate that Carter was able to breathe on his own when he was born, and I was able to hold him before he was taken to the NICU. We spent 6 weeks in the NICU at Aultman Hospital, where we were, again, very fortunate that Carter just needed to get bigger and stronger until he was ready to go home. We were also fortunate to be surrounded by the doctors and nurses who helped guide us through our son’s care and taught us so much while we were there.

A few days after we were admitted to the NICU and once I knew that Carter was okay for the moment, I sort of shut down. I went to the NICU every day to be with him, but I didn’t really talk with anyone or let anyone else come for about a week.  ]I needed to process how differently things could have been. There were babies I walked by every day born weeks earlier than Carter who were not able to breathe on their own, who had diffi 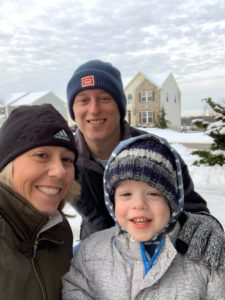 cult and life-changing diagnoses, and some who were never able to go home. Even now, when I think about how I felt in those moments, I cry.

During that time, I wish I would have been able to talk with other parents who had been where we were. I wish I would have known about Graham’s Foundation. I’m so thrilled to be working with a not-for-profit whose vision is a world where no parent goes through the experience of prematurity alone. We provide a number of resources to preemie parents, including valuable information, care packages, and a parent-to-parent mentor program. I am excited about working with Graham’s Foundation and will do everything I can to help ensure that no other parent has to go through the experience of prematurity alone.

Michaela Calhoun has recently joined the Graham’s Foundation team and will be working with our NICU outreach and ‘Tinis for Preemie events! We are so excited to welcome her!