Meet Selena, One of Our Preemie Parent Mentors

This post was written for us by Selena, one of our preemie parent mentors. Her area of expertise is supporting preemie parents, but she is also available to talk abut parent wellness, parenting multiples, and life after the NICU. Here’s just some of her story: 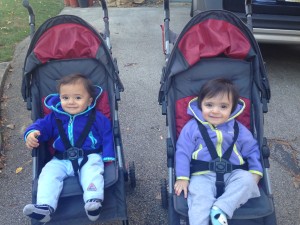 After what felt like a never-ending battle with infertility, one of the single best days of my life was finding out that I was pregnant with twins. Hearing that news was overwhelmingly thrilling in a way I can never fully describe. All that I can convey is that it felt a lot like winning the lottery…of life!

As I experienced pregnancy for the first time, I found it hard to turn off the feelings that came with infertility like a switch. I was very excited but in a controlled, cautious way. Luckily, as my pregnancy moved forward, things progressed smoothly. That is, with one exception. At 26 weeks, my doctors found that baby A (my daughter Noelle) showed less amniotic fluid than her brother (Leo) who had normal levels. My doctor was concerned Noelle had too little fluid to keep growing and he was monitoring the three of us twice a week.

I had managed to make it to 31 weeks when I went to see my doctor for a checkup. The last thing that I expected that day was to be admitted to the labor and delivery ward of the hospital―but that’s exactly what ended up happening. After being admitted, I was monitored and told I’d need to be observed at the hospital for the next 23 hours. I was having contractions beyond what was normal at my stage of pregnancy even though I didn’t really feel the contractions.

But as the hours passed, I started to feel the contractions and then some.

I couldn’t sleep a wink all night out of pure discomfort and worry. By 4 am, as my contractions grew dramatic, I could see the nurses and doctors looking nervous. I was scared. My husband Geoff rushed to the hospital. The doctors gave me Magnesium and explained that if this was false labor, the medicine would stall my delivery, but if it was true labor, the Magnesium would do nothing but make me feel lousy. I took the magnesium and not one minute later, my water broke and my twins were on their way. 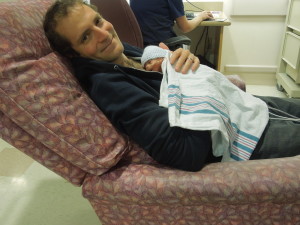 The nurses and doctors looked horrified. And my usually calm husband (who is also a pediatrician) looked pale and anxious. For someone already squeamish about hospitals and blood, I was f-r-e-a-k-e-d o-u-t. As the team rushed me to the Operating Room, they explained that giving me medicine for the pain was not in the cards. The babies were coming and any medicine at this point would put them in danger. To my astonishment, right after I got to the OR, I naturally delivered my twins with no medicine…four minutes apart from each other. As the room filled with doctors and nurses, my babies were whisked away and I was sent to the maternity ward.

Things were too surreal…I couldn’t process all that had just happened. I was told to rest and sleep but it felt so unnatural to be apart from my babies. I think I was in a form of shock at all that had just happened. A few hours later, my husband wheeled me to the NICU, a beeping, noisy place that was completely intimidating but that would soon become a second home. In the far corner, in two isolettes were my babies. I couldn’t take my eyes off of them and I couldn’t wait to meet them and hold them.

Over the next five weeks, my husband and I lived in and out of that NICU while the doctors and nurses helped our babies to grow, breathe on their own, and eventually eat on their own. My husband Geoff was an equal partner in parenting our babies at the NICU, not an easy feat considering that he was holding down a new full time job. 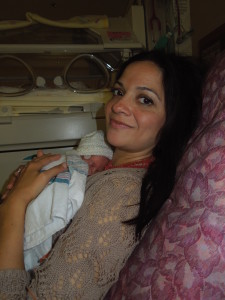 During those weeks, we worried, we felt scared, we hoped, and we tried to tap our deepest levels of patience. It was terrifying to give up caretaking to other people and yet it was kind of scary to imagine taking them home without skilled help too. Slowly our babies hit their milestones, like reaching normal bilirubin levels, having feeding and breathing tubes removed, moving from retinopathy to normal eyesight, and growing from 2 pounds each to 4 pounds each.

As we readied ourselves to take the babies home, it dawned on us what an awesome responsibility was in front of us. In a word, the experience of having babies in a NICU was traumatic. It was not how I planned things and not how I imagined those first wonderful weeks with a child. But if we had connected with more parents going through what we were going through, it would have made life easier.

Through family, friends, and each other’s support, we weathered life with no sleep and double the family members! And slowly, over the months that followed, we were able to grow our babies from fragile little beings to hearty, playful toddlers. We did it, and you can do it too.

About The Author: Selena R.