This is the first of a two part series from Nicole, one of our newest preemie loss mentors. It is an extremely raw and personal look at premature delivery and loss. Sensitive content is included.

When I was around 17 weeks pregnant, I started experiencing some lower abdominal pains and discomfort. During one of my regular OB checkups, I explained my symptoms to my doctor, who said it sounded like I had a UTI. For the next couple of weeks, I was taking medication to treat this, however things never got better. The pains I was having kept getting worse and I just flat out didn’t feel well. One day, while at work, I started to leak some fluid and I called my doctor. I was told to go to labor and delivery immediately to get checked out. After several hours of being at the hospital, I was released and was told that everything was fine and that it was just a bad UTI.

A couple of days went by and I ended up in the ER to receive a dose of medication from an IV to help the symptoms I was having. When we left the ER, we had plans to go to Lowe’s to get all of the things we needed to finish our baby’s room. We never got to make that special trip to Lowe’s…

While sitting in the ER and looking at the doctor’s face, I immediately knew something was wrong. I was admitted into the hospital and was told I would be staying at least a week for them to keep an eye on me. While we were waiting to be moved into my hospital room, my normal OB came to visit me and check things out herself. “This isn’t good. It’s too soon” are the words that will haunt me forever. She explained to my husband and me that I was already dilated 1cm and that my cervix was almost non-existent. I also had an infection somewhere in my body that they couldn’t find. My white cell count kept climbing and climbing and no one could figure out why. I had a team of doctors and nurses who immediately started doing
everything they could to prevent me from going into labor and trying to figure out where the infection was. They ruled out a UTI like they previously had thought, but where was this “mysterious” infection? To this day, we still don’t know.

I spent one night in the hospital and things were okay. I remember the relief I felt when I woke up the next morning and hadn’t gone into labor. We spent the day hanging out at the hospital, visiting family members who came to see us. I’d have some pretty mild contractions, but they were few and far between so I thought everything was okay. It wasn’t until my husband and I decided that we needed to get some rest and go to bed that I knew something was horribly wrong. We got all cozy (or should I say, I got cozy in my hospital bed while my poor husband was stuck on the uncomfortable couch they provided), and that’s when everything quickly changed.

The contractions got bad. They were happening often and they were intense. I remember trying to keep my sobbing quiet to my husband could sleep, but he bounced up from the couch as soon as he heard my tears and called the nurse in for me. It was in that moment that I panicked. I was dilated 6 cm and all of a sudden the look on all the doctors and nurses faces were terrifying me. They turned on all of the lights, sat me up, started hooking me up to what felt like a million different IVs, they brought in a table of medical tools for delivery, and my room when from being just the two of us, to a team of worried looking people in an instant.

I was in labor and there was nothing they could do to stop it. The doctor that was there that night, sat next to me on my bed, with tears in her eyes, and she prayed with us. All of the doctors and nurses that cared for us that night had tears in their eyes during the entire process. 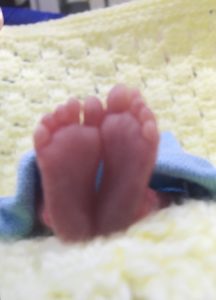 Since I had an infection that no one could find, I couldn’t get an epidural. I have never been in so much pain in my life. After several hours of this, our little boy, Kade was born. He was 9.5 oz and 9.5 inches long. He was so tiny, but he was absolutely perfect in every way. I remember the doctor telling us that once he was born, he would pass away within one or two minutes. However, our sweet boy was so healthy that he survived for 99 minutes. During those 99 minutes, we loved on him, gave him kisses on his tiny forehead, held his hand, and tried to let those precious moments soak in because we knew they wouldn’t last much longer. Kade got to meet all of his grandparents, his uncle, and he was baptized as well before he passed away.

I remember the moment I watched his tiny heart stop beating. It didn’t truly sink in for me until I handed him over to my nurse and she took him out of the room for what would’ve been the last time we would ever see him. I spent the next several hours listening to other babies being born in the rooms around us. It was torture. Why my baby? Why us? Why?