Pre-eclampsia Awareness Month may be coming to a close but that doesn’t mean we have to stop doing our part to introduce pregnant mothers to the symptoms of pre-e! We’ve asked moms to share their symptoms in their own words because everyone’s experience with pre-eclampsia looks a little different. If you’re experiencing any of the symptoms below, consult your doctor as soon as possible.

The first thing I noticed were the flashers. Then I had two of the worst headaches of my life. I had one high blood pressure reading at the Dr. I also had high levels of protein in my urine. The Friday of the weekend that I had my son I had gone into the Dr. for test and to turn in another round of 24 hour urine collection that I had to do. That evening the Dr. called me and told me all of my tests came back as slightly abnormal. That coupled with the headaches, the high levels of protein in my urine and the high BP made him very concerned. -Nathalie N.

Swelling at 23+ weeks, hands and feet. Then at 25 weeks my face was swollen and not feeling great but couldn’t put my finger on what was wrong. Sore head and blurred vision on and off for a few days. BUT I didn’t have protein in my urine. -Claire R.

The hardest part for me was that I didn’t have a ton of symptoms. I had some swelling, but I thought that was pretty normal. The swelling got worse, but I figured that I just had it worse off than most people. However when I went to a doctor’s appointment, my blood pressure was around 150/90. I’ve never had any blood pressure issues so this was definitely new. -Angela P.

My only symptom was swollen feet. Like a previous commenter, I also work in a school and the after the school nurse took my blood pressure, she told me to call my doctor. -Dannelle M.

I had high blood pressure every I went in for check ups. Protein in my urine that increased enough I had to do the 24 hr collection. I had the nausea and headaches but I thought it was normal since it was my first and only pregnancy I didn’t know what to expect. I went in to the doctor one morning due to pain in my upper stomach and back which he thought was probably gallstones. The next day after I turned in my 24 hr collection they called me back in. Blood pressure was sky high, 4+ protein in urine, platelets dropping and my baby was in distress. -Tiffany C.

In hindsight, I dismissed a lot of the “typical symptoms”: headache, dark spots in my vision, nausea I thought was from getting sick from traveling for work. It came and went and I thought if it was something like preeclampsia, it would be constant…I never should have downplayed my symptoms. -Miriam G.

No real symptoms other than swelling, which wasn’t enough to raise any alarms. My preeclampsia was found during a weekly OBGYN visit. It started out as 150/100. I was sent to Triage and my numbers kept climbing. -Danielle

I had no symptoms whatsoever, I felt perfectly fine both times. -Heather L.

I was always tired, my breathing was extremely loud and I was winded. My hands were painful and swollen to the point where opening doors or driving became difficult. By the time my doctors figured out what was going on, it was too late. -Alyson M.

Had major swelling in my ankles and hands. Headaches and blurry vision. I just thought it was 3rd trimester symptoms. Ended up having a Dr appointment that week (my glucose test) when everything happened. My bp was 184/120. They sent me right over to L & D when I thought it was just some routine tests. Found out I had protein in my urine and my blood platelets were low. I ended up having sever preeclampsia and I was at 27 weeks. -Stephanie

I was SO swollen, felt like my skin was going to burst! -Sarah M.

Headaches!!! Felt so “off” like I was waking in quicksand. Just the overall feeling of not feeling well. Then the weight increase started getting crazy. I can’t stress the headache and migraines enough. Then came the protein in the urine. -Karri M.

I had protein in my urine and high blood pressure from the beginning. I did several 24 hour urines. I was slowly gaining weight and my BP was rising. I remember my hands and face swelling. At my 30 week appointment my BP was high and I was up 20lbs+ out of nowhere. No one seemed concerned. I was also seeing glittering spots. -Amber

I had a horrible headache that wouldn’t go away and was different than the typical migraine. My bp was very erratic, sometimes sky high, sometimes perfectly normal, other times almost non existent. No protein in my urine or any other symptoms. -Sarah R.

Swollen feet and ankles, shortness of breath, and decreased fetal movement. I went in at 22 weeks and asked for an ultrasound but was denied. At 23 weeks I demanded one, and she was born via emergency c-section later that day. BP didn’t get really high until after delivery, then stayed high for several days along with severe edema. -Laura S.

I had extreme pain in my upper right rib cage area which was my liver shutting down. -Erin B.

Oh the headaches were fierce, then the carpal tunnel kicked in, finally it was the liver area pain and vomiting for three days that sent me to the er with HELLP syndrome and baby boy was born 24 hours later. -Katrina

Swelling, dark urine, & epigastric pain were first symptoms. I was admitted to the hospital after severe bleeding and the night before I delivered I had the worst headache of my life then lost my eyesight. -Melanie A. 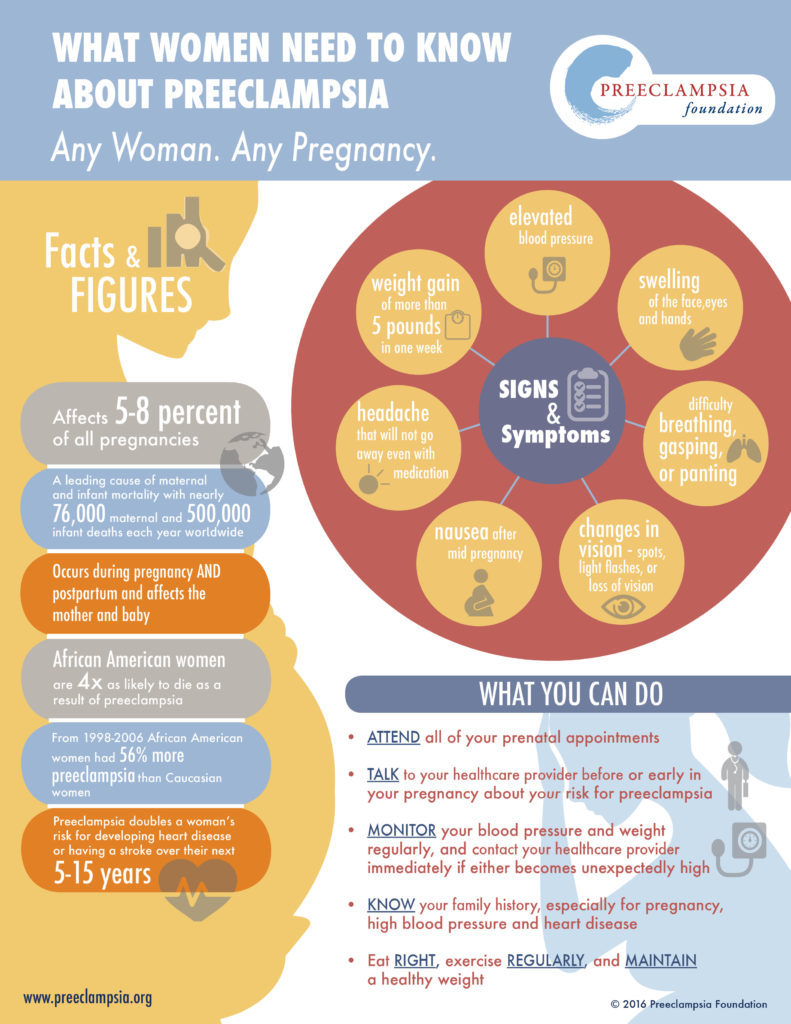