After delivering Corbin 10 weeks early I was sent up to my room with no baby.  It wasn’t the delivery I always imagined. There was no magical bond holding my baby in my arms, instead I bonded right away with my breast pump.  I got to hold my baby for maybe 60 seconds while he was hooked up to all the machines.  To be honest I don’t even remember this.  I don’t know if it was the shock or the meds, but I have no memory of holding my new baby for the first time. Over the next 2 days I would get wheeled down to watch him through the isolet.  Sometimes the nurses would let me hold him while he got his feeding through his NG tube. It didn’t feel real. I cried all the time.

The doctors told us that Corbin needed to do 3 things to leave the NICU, eat on his own, gain weight and maintain temperature. 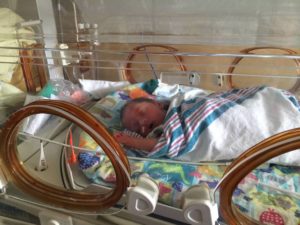 Seem pretty simple for term babies, but as I would find out it is a marathon for preemies.  After my 3 days in the hospital I was being dismissed. Our plan was to stay at the Ronald McDonald House next to the hospital, since we were 150 miles from home. unfortunately the house was full. My husband and I got back into our car, no baby and no place to stay. I was beyond devastated. We knew we could sleep in our car for a couple of days, but we knew long-term that wouldn’t be an option. The only choice we had was to rack up even more bills by staying in a local hotel. Nothing like having a million dollar baby and a hotel bill to boot!

We went to the hospital every 3 hours to see Corbin get his feeding and leave for him to sleep and me to pump. There was a time the nurses let me hold him while he was eating. While I was holding him a nurse came running up to us and started rubbing his back. While I was already tired, hurting and developing post partum, now my baby had quit breathing. The nurse was able to get him back into rhythm. He started on caffeine right after that and only had a few more “hiccups” after that. 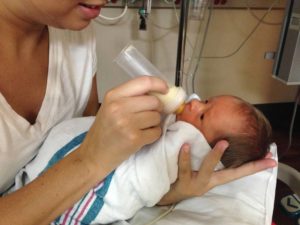 After a few days, he was able to get rid of his CPAP and move up to the next floor. We shared a room with 2 other babies. Now Corbin may have been early, but he was a massive 4 lbs! In the room with us was a baby born at 24 weeks and fighting for his life every second. It was hard to watch him constantly struggle and knowing how long of a road he had. We were very lucky.

Over the next few weeks we were working on maintaining body temperature and eating. At this point we were still staring through the glass and watching our baby grow. Corbin developed an eating issue. After every feeding he would spit all of it up. We would watch the monitors dip and out it would come like clock work. The doctors reassured me he just needed time, but being a first time mom and watching monitors dip like they did made me sick to my stomach.

Over the next few days we were able to move to a private room and an open isolette! I was bound and determined to breast feed. I tried everything to get him to latch, but got nothing in return. I would try to breast feed, fail, hook him up to the NG, then pump. There was about a

25 minute window then I would start all over again. I knew we were very lucky, but I hurt. My friends were all back home delivering their healthy term babies. Getting to breast feed and complaining about sore nipples and night-time feedings. Wow how I was that could have been me. What I would have given to have their “problems” while I was watching my baby being hooked up to machines and getting some sleep a mile away in a hotel.

I’m not sure where the time went but after  what I thought was  a few days of the constant cycle, the doctor came in and said we would be dismissed the next day. YAY!! We were beyond scared. Corbin hadn’t been taking to the breast and when given a bottle would only take a few cc’s. We packed our things and said goodbye to the amazing staff we had got to know. It had been a month of ups and downs and tears and laughter. We had a healthy baby boy and headed home to our new “normal” and the mountains we would face.