My Journey: Not an Easy Start

To introduce myself,  I am what I considered a picture of health. I’m a runner, a triathlete and a vegetarian. I lived a very active and healthy lifestyle. My husband and I were married in June of 2013. We both wanted kids right away and by God’s grace, we became pregnant right away! Only a week after I had a positive pregnancy test, I had horrible stomach pain. My doctor sent me to do lab work and have a sonogram. I was terrified. I hadn’t even told my parents I was pregnant and now I was in horrible pain and scared. All my blood work and sonogram came back normal and they gave us a due date of late July. I did everything right. I didn’t drink soda, I ate super healthy and maintained my active lifestyle. Things started to fall apart early on in March. I woke up and used the restroom and noticed the toilet was full of blood. Terrified I woke my husband who drove me to the hospital. My hospital is over 30 miles from where we live. When we arrived they did an ultrasound and found I had a placenta previa. My bleeding stopped and my baby boy was fine. I was put on 3 days bed rest. After that episode another month went by with no real problem. Then again I woke up in the middle of the night with more bleeding and off to the hospital we go! My husband and I were much more relaxed since we had an idea of what was going on.  When we arrived at the hospital they did another ultrasound and found again the placenta previa. It had moved up which was good, but it made the doctor’s question why I was bleeding. They sent me home and decided I could go back to work, but would start having stress tests once a week until my due date.

The following week I went in for my first stress test. When I was done, the technician said I was having contractions about 8 minutes apart and was dilated 2cm. My doctor didn’t seem concerned, but I knew something was wrong.The next night I woke up with another bleed. This one was different. It came with clots and the bleeding was very heavy. We arrived at the hospital. I wasn’t even 30 weeks pregnant. The medical staff was unsure of what was going on but decided I needed to be medically transported to a larger hospital an hour and a half away. At this time my contractions were getting closer and the pain was intensifying. I was given steroids and magnesium. The ambulance ride was rough. About an hour into it the paramedic riding with me told me how scared he was because he had never delivered a baby! When we got to the hospital we were greeted with what seemed like hundreds of doctors. I was told all the risks and issues that come with delivering this early. They were prepping for a c-section when by a miracle my labor stopped. They wanted me to stay for 3 days to be monitored. They did many tests and never could tell what had caused me to bleed and go into labor. My husband and I were walking out of my hospital room after our 3 days, when all of a sudden my bleeding returned with a vengeance. By the time I got undressed and down to the surgery floor I was dilated to 4cm with constant contractions. A fast 23 minutes later, I was getting wheeled into surgery. 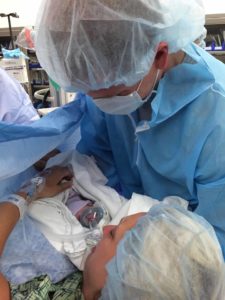 They were pulling doctors from the hall and into our room. I have never been so scared. The contractions had moved to constant pain. I was worried I would pass out from the pain before they could get my spinal meds in. In what seemed like a mad dash. The next thing I remember was my husband getting to hold my new HEALTHY baby next to my head. He was here and alive. 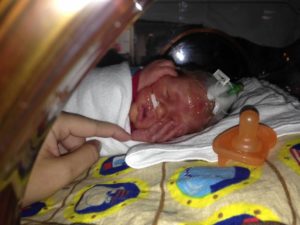