I came across an article the other day that states that there is now a simple urine test that can tell if a baby is going to be premature or not. The article states that the team analyzed the metabolites found in the urine of 438 pregnant women, and detected that elevated levels of the amino acid lysine were associated with spontaneous preterm birth. They also discovered that increased levels of an N-acetylated glycoprotein were found in women who had to be induced early.

This could be a great stride forward for preemies and their parents. 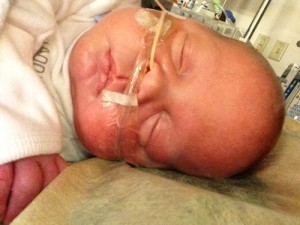 Knowing you’ll have a preemie is one thing; having a preemie is another. While I would like to say I would have been more prepared thanks to a test for prematurity, I don’t really think I would have ever been prepared for the NICU journey. All the emotional ups and downs and then the after effects were never anything that I could have prepared myself for.

I remember I kept telling my husband we have to have the nursery done the month before he’s due, just in case. I am very much a planner. I get everything ready for everything even when we go on vacation. I guess God had other plans because when all 4 pounds 9 ounces arrived in this world I was nowhere near prepared for the journey ahead. The nursery was not even painted. Now I look back and I realized that all the planning in the world could have never prepared me for our little mans arrival.

All the worrying and lists in the world would have never been enough.

So to all the moms out there, preemie or not, don’t rush things. Things will happen just as they are meant to whether you are ready or not. My advice is to just go with the flow of things and enjoy the time you have either being pregnant or spending with your little one.

Hope ya’ll have a good week!