NICU nurses who make a difference 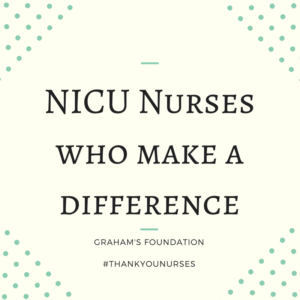 I gave birth to our twin boys unexpectedly at 24 weeks gestation. From the time I had my first sign of labor until they were born was a mere seven hours. I remember the moments right after they were born – I was laying on the operating table trying to wrap my brain around what had just happened. The NICU team had just taken Joseph out of the operating room to the NICU. I was able to see him just briefly as they wheeled him past me.

I tried to sit up as best I could to catch a glimpse of Campbell. All I could see was the top of his tiny head. As I was trying to sit up as best as I could post c-section, a nurse looked at me and said, “He’s doing okay. We are taking good care of him.”

I laid back down and thought, “Whew. He’s okay for now.”

The following day was my first time visiting our boys in the NICU. A nurse walked up to my husband and me and said, “Hi! I’m Renee’. I was taking care of Campbell in the operating room yesterday.” I finally realized a day or so later that she was the nurse who put my fears at ease by taking just a moment to let me know how my son was doing.

Campbell was transferred to another hospital five days after birth where he passed away after 23 days of life. When we went to Joseph’s hospital later that day, the nurses wanted to know the arrangements we had for Campbell. We let them all know not ever expecting anyone to come.

We were at Campbell’s visitation and two nurses walked in the door. One of them was Renee’. Campbell only spent five days at his birth hospital. Renee’ had only taken care of him a couple of times before he was transferred and here she was – two days before Thanksgiving – letting us know that she cared. I remember feeling honored that she took time to let someone know that their sweet child mattered – even if she had only seen him a couple of times.

We got to know Renee’ very well over the next days, weeks, and months. She became one of Joseph’s primary nurses and took care of him every time she was working. She knew Joseph so, so well. I think my mind and body rested well on the days she had him because I knew that she knew him and I knew that she would pick up on something if anything was wrong.

Eight weeks to the day after the boys were born, the doctors wanted to try Joseph off the ventilator. It was a Saturday and Renee’ called to let me know the plan for trying to extubate him. She asked if we wanted to be there. For some reason, it made me incredibly nervous so we told her we would come once they were done. Not much time passed until she called again. Joseph was off the ventilator and on CPAP.

When we got to the hospital that day to visit, there was a beautiful photo of Joseph on his bed. Renee’ had quickly snapped the photo when they extubated Joseph. It was the first time we had seen his sweet face without any tubes or wires. I treasure that photo to this day. Throughout Joseph’s time at the birth hospital, she would take pictures of him to give to us. My husband and I couldn’t be there all day, every day because we were working. Some of my favorite photos of his early days in the NICU are ones that she took.

Renee’ not only took care of Joseph but she took care of us. She became like part of our family. I always looked forward to the days she worked. I felt like I was getting to see a family member. Over the days and weeks, she became not only a nurse, but a friend. We knew about her family. She knew about ours. She cared for us. She showed us love. She made a difficult time seem just a little easier by her kindness and generosity.

When Joseph was about four and a half months old, Joseph needed to be transferred to a local children’s hospital due to dangerously high CO2 levels. I was so nervous. Would we meet someone like Renee’?

We were transferred to the local children’s hospital and Joseph had to undergo surgery to correct his CO2 levels. Once he recovered, he was moved to the non-critical side of the NICU. We were thrilled because it was one step closer to home! We walked into Joseph’s new room and the nurse introduced herself, “Hi! I’m Anna. I’m so sorry I haven’t called you but he was just moved and I wanted to get him settled.” I had a feeling of peace. I knew she was our new hospital Renee’.

Of course we told her it was not a problem that she hadn’t called – we were just thrilled he was in his own room! Anna spent time with us that day. She got to know us. She asked us questions about Joseph. She wanted to get to know him and us.

Joseph developed a rare case of late onset Necrotizing Enterocolitis at five and a half months of age – two days before our discharge date. Of course, he was moved back to the critical side of the NICU. I remember Anna coming to visit us. The care and compassion she showed that day was something I will never forget. After a couple of more surgeries post-NEC, Joseph was well enough to be moved back to the non-critical side of the NICU.

At this point, we were approaching seven months in the NICU and the decision was made to move Joseph out of the NICU to the regular GI floor in the hospital until discharge. While I was excited knowing we would soon be going home, I was sad that Anna wouldn’t be caring for Joseph anymore. Moving day to the regular floor was quite an emotional day. I was so thankful Anna was caring for Joseph that day and was the one that helped move him to his new room on the GI floor.

Even though we weren’t going to be going home from the NICU, Anna put together an amazing notebook for us to have. In it was information about all of the medications Joseph was taking, resources we might need, information about his diagnoses, reminders about our post-discharge appointments, important hospital records we would need – anything you could think of was in this notebook. It was an invaluable resource that I carried for months.

Renee’ and Anna didn’t just do these things for us. They do them for everyone.

Joseph has been home from the NICU for six and a half years. Renee’ and Anna are still like part of our family. They will forever be like family. One of my favorite days was introducing Renee’ and Anna to each other. Through an experience that the three of us were fortunate to have together, Anna met her now husband. We were all able to celebrate together at her wedding.

Having Renee’ and Anna in our lives has forever enriched our lives. As NICU nurses, but most importantly as people, they have taught me so much. They are the epitome of love and kindness, respect and passion, care and concern. They treat others the way the world should treat each other. They know how to show love to those they meet.

Our family will forever be grateful to Renee’ and Anna for not only caring for Joseph and Campbell, but for caring for my husband and myself. I envision them being there when Joseph graduates high school. I see them watching him get married and one day meeting his children.

They will always be a part of our family.

Until January 27, 2017, you may nominate your favorite NICU nurse at pampers.com/thankyounurses