I recently noticed a bunch of items I’d saved from the NICU serving non-traditional purposes in my house. For instance, a tub that was once used for bathing and storing onesies now holds a bunch of painting supplies. “RAYMOND” is still scrawled in permanent marker across its side. 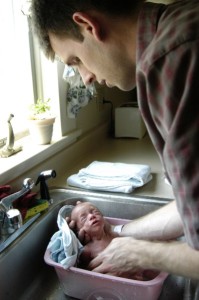 A syringe that was once used for measuring medicine acted as a water-squirter for a birthday party game a few weeks ago. The tiny onesies and pajamas my babies wore are now clothing my daughter’s dolls.

I have at least a half-dozen cheap thermometers that nurses sent home with me rather than throwing them away. I have plenty of half-used bottles of hand sanitizer given to me by the NICU. I used to have dozens and dozens of hospital bags – the ones with a drawstring that say “PATIENT BELONGINGS” on the side. They used to carry soiled preemie clothes and empty bottles for breastmilk collection, but were re-used until they were gone. I still have a magnet on my refrigerator with the NICU’s phone number on it; now it holds artwork up.

There are still plenty of reminders of my three kids’ NICU stays, but the older my kids get the fewer of these items are found laying around my house. My reaction to NICU reminders used to be one of pain, but more often now it is one of victory – a reminder of just how far we have come.