Five years ago, my preemie was born at 34 weeks after my water broke and subsequent umbilical cord prolapse escalated to an emergency C-section. She spent 40 days in the NICU, one of which was Halloween. 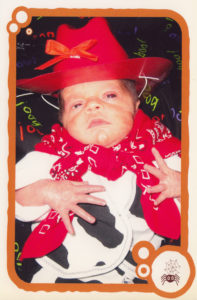 The nurses had a tradition of dressing up the babies in costume and taking pictures of them. They printed the pictures and set them by the bedsides for the babies and their parents. Most parents were happy to have a token of remembrance of the holiday, but I was upset.

My daughter was dressed in a cowgirl suit, the same costume that was used on other babies in the nursery. I found it odd that the nurses were required to sanitize their hands before and after every contact with each baby and were required to use fresh sheets and equipment on each child so as not to share germs, but the same costume was worn by all the babies. The baby two beds down had whooping cough. My daughter had recently overcome a flu bug and had been on contact precautions for a few days. I was not thrilled that they shared the same costume.

I was also not thrilled by the idea of someone else dressing up my baby. I had no problems letting the nurses dress her in the onesies and pajamas that I brought in, but it bothered me that someone else was having the fun of dressing her up. That should be my job, right? I already felt like I was missing out on so much. Looking at the picture later didn’t make me feel any better about being in the hospital on Halloween; it made me feel worse! My daughter had worn her first costume and I had missed it.

I understand that not everyone feels the same way; it did appear that the other NICU parents appreciated the pictures and some said it helped them feel a little more “normal” when everything else about their situation seemed abnormal. I did send a letter to the hospital pointing out the double standard on sanitation, to which they said they would investigate.

How do you feel when NICUs dress up your babies for photo shoots? Do the pictures help you through the holidays?