Parenting a Preemie Baby and Beyond

While the number of micropreemies born each year as a percentage of total births is relatively small, each year over 50,000 micro-preemies are born in the United States. Even more preemies are born yearly, and these slightly older, slightly bigger preemies may face an equally difficult struggle.

Being the parent of a preemie is a stressful, scary and exhaustive journey. At first, you are in shock because your baby isn’t a baby. Your baby is still a fetus, born in critical condition and likely to remain in that condition for several weeks, maybe months. You will face life or death decisions with little understanding of why, how or the potential risks.

As a first-time father, you have an idyllic vision of your wife holding your newborn. The first image I had of my wife Jennifer was seeing her in critical condition at 24 weeks pregnant, listless and unable to communicate. Our preemie twins were rushed from surgery to the neo-intensive care unit (NICU), needing to be bagged to keep them alive because they were unable to breathe on their own. I will never forget the looks on the faces of the doctors and nurses as we made our way down the hallway. They knew the journey ahead.

Our babies were immediately connected to medical equipment from head to toe and that became their lifelines. I quickly realized that when a baby is born so early, most, if not all of the normal bodily functions have not yet developed. Your preemie is born with little or no immune system and can’t breathe without support, can’t eat and doesn’t have a functioning digestive system. In order to get critical information and support the doctors and nurses need, they have to poke and prod, insert tubes and wires and yet the baby’s blood vessels are as fragile as tissue paper.

When a preemie is born so early, all you want is hope. Over time, you begin to understand the purpose of all the equipment, what all the numbers on the monitors mean, what medications are being administered and why. Eventually, the reality of the mountain your baby has to climb starts to set in.

As you begin to know more, you also are in a better position to be an advocate for your preemie. You start to bond and understand what your baby is trying to communicate. I remember being so excited when our daughter Reece cried for the first time…and I could actually hear it.

For a parent of a preemie, every milestone is a combination of excitement and relief. You feel like you can breathe, just a little easier. Our doctors and nurses were wonderful and we developed a close relationship. As badly as you want to be there with your baby 24/7, that is not in the best interest of your own well-being. Knowing your baby is in good hands helps but it doesn’t make being away any easier.

Our son Graham had an incredibly difficult journey. The doctors were never able to wean him off the ventilator, which is a critical milestone for a baby’s survival. Graham was continually fighting infections, which is extremely common for micro-preemies. Eventually Graham simply couldn’t fight any longer. I held my son only once…the day we had to say good-bye. 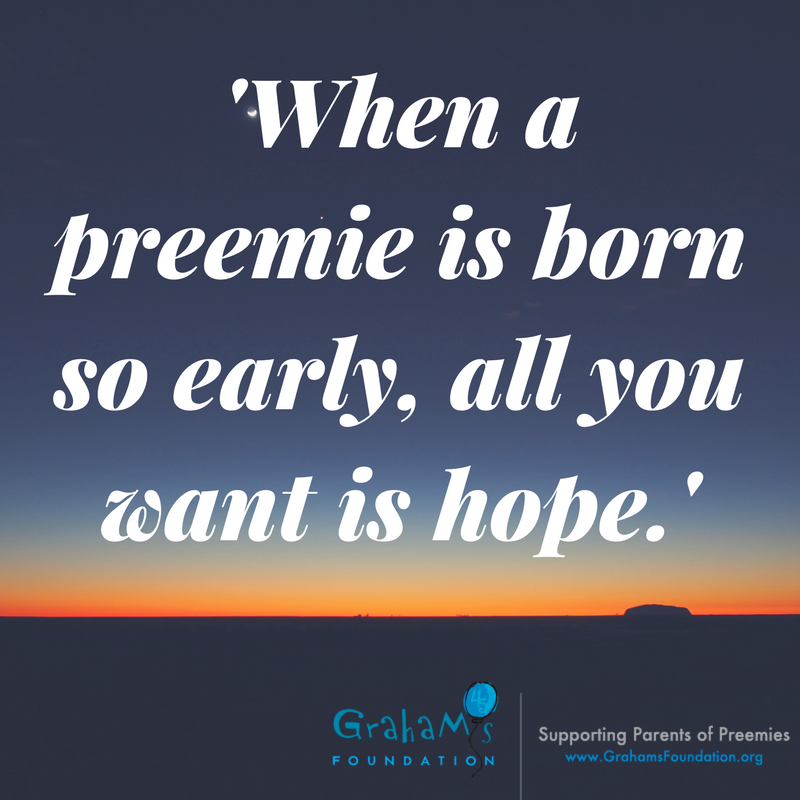 Our daughter, Reece had a roller coaster journey as well, but fortunately she was off the ventilator and able to breathe on her own, with the support of oxygen, after three weeks. There were more than a few instances where we almost lost her during her stay in the NICU. A couple of times we actually spotted something quickly because we were by her bedside. This made it even more difficult to ever go home. We were grateful, but it is also a helpless feeling to see your baby needing so much help to stay alive.

Parents should be excited to bring their newborns home from the hospital. For parents of micro-preemies, there is typically overwhelming fear. Often, your baby will require medical equipment, oxygen, numerous medications, social workers, therapists, specialists and frequent visits to the doctor.

Of course, we never thought this would happen to us. No one really does. We have a new appreciation for the marvels of modern medicine yet we`also understand its limitations. When you go through something like this, it is nice to know that there are others out there that understand.

We will never forget the support we received from other parents that knew exactly what we were going through.

That’s why Graham’s Foundation exists. Our purpose is to provide new parents of micro-preemies and preemies with care packages, materials, and a peer-to-peer connection that help them know there are others that understand, are here for them, and hopefully, provide a support and hope when they need it most!