For Preeclampsia Awareness Month, we asked our community of preemie moms to share the symptoms that they had. Some looked a lot like normal pregnancy symptoms while other preeclampsia symptoms were definitely more alarming! And in few cases, preeclampsia was diagnosed with no symptoms at all!

While preeclampsia is relatively rare, it’s important to watch out for symptoms because left untreated it can develop into HELLP syndrome or eclampsia. It can also hurt your baby! Your doctor or midwife will screen you for preeclampsia at every prenatal visit by taking your blood pressure (and testing your urine for protein if it’s high), but if you know what to look out for you can potentially catch it early – before premature delivery is the only treatment option left.

Here are some of the symptoms our preemie moms shared:

The first thing I noticed were the flashers (visual changes). Then I had two of the worst headaches of my life. I had one high blood pressure reading at the doctor, and I also had high levels of protein in my urine. The Friday of the weekend that I had my son I had gone into the doctor for tests and to turn in another round of 24 hour urine collection. That evening the doctor called me and told me all of my tests came back as slightly abnormal. That coupled with headaches, high levels of protein in my urine and the high blood pressure made him very concerned. ~ Nathalie

I had swollen feet and major vision disturbances… it looked fuzzy like an old tv screen without service. ~ Amanda

Waking up to swollen feet, which would subside during the day but reappear when laying down. As a person with a typically low blood pressure I went in because my head was pounding and I was vomiting. My BP was 190/90+. The doc said that it’s usual for both but it’s not my normal. He missed preeclampsia diagnosis and I ended up with a preemie. ~ Erin

I had no real symptoms other than swelling, which wasn’t enough to raise any alarms. My preeclampsia was found during a weekly OB/GYN visit. It started out as 150/100. I was sent triage, and my numbers kept climbing. ~ Danielle

I had high blood pressure every time I went in for check ups. Protein in my urine that increased meant I had to do the 24 hr collection. I had the nausea and headaches but I thought it was normal since it was my first and only pregnancy, so I didn’t know what to expect. I went in to the doctor one morning due to pain in my upper stomach and back that he thought was probably gallstones. The next day after I turned in my 24 hr collection they called me back in. My blood pressure was sky high, 4+ protein in urine, platelets dropping and my baby was in distress. ~ Tiffany

Headaches! Felt so “off” like I was waking in quicksand. Just an overall feeling of not feeling well. The weight increase started getting crazy. But I can’t stress the headache and migraines enough. Then came the protein in the urine. ~ Karri

In hindsight, I dismissed a lot of the “typical symptoms” like headache, dark spots in my vision, nausea I thought was from getting sick from traveling for work. It came and went and I thought if it was something like preeclampsia, it would be constant… I never should have downplayed my symptoms. I always felt just fine when I went in for checkups. ~ Miriam

I had no symptoms whatsoever; I felt perfectly fine both times. With my first pregnancy, I went in for my 31 week checkup and was told my blood pressure was high and I was spilling protein in my urine, so I was admitted. ~ Heather

Mine started with just feeling off, then swelling and then I had pain in my side. I could not sleep and ended up up getting sick but was sent home after some IV fluid. Went to OB next day and BP was only tad high, but that night I was back in ER with same pain. Next day had an ultrasound at specialist and was sent to the hospital after BP check. After a blood test they came in saying I needed a emergency c section at 28 weeks because I had severe HELLP Syndrome and my liver was shutting down ~ Laura

Swelling! I thought it was normal until it wouldn’t go down! Headaches, which I brushed it off since I’m headache prone. And I just felt off! I’m a teacher and had the school nurse check my blood pressure – she sent me straight to my doctor. ~ Kendall

I had major swelling in my ankles and hands. Headaches and blurry vision. I just thought they were 3rd trimester symptoms. Ended up having an appointment that week (my glucose test) when everything happened. My BP was 184/120. They sent me right over to L & D for what I thought were just some routine tests. Found out I had protein in my urine and my blood platelets were low. ~ Stephanie

Swelling, dark urine, & epigastric pain were the first symptoms. I was admitted to the hospital after severe bleeding, and the night before I delivered I had the worst headache of my life then lost my eyesight. I delivered twins at 25 weeks and regained my vision about 4 weeks later. ~ Melanie

The hardest part for me was that I didn’t have a ton of symptoms. I had some swelling, but I thought that was pretty normal. The swelling got worse, but I figured that I just had it worse off than most people. However when I went to a doctor’s appointment, my blood pressure was around 150/90. I’ve never had any blood pressure issues so this was definitely new. I was given a 24 hour urine collection and made an appointment to follow up in a week. Midway through the week, I noticed the baby wasn’t moving quite as much. My nurse said if I felt worried to go to the hospital. My husband and I decided it was better to be safe, so we went. When we got there, my blood pressure was up to 187/117 and I was told we were going to have a c-section that day. ~ Angela

My BP was a constant battle through my pregnancy, and I had some swelling right before the end. On Sunday, we were walking through a store, and my vision suddenly changed then stabilized. I chalked it up to too much sun but told my doctor the next day at my check up. Test showed proteins in my urine, and I was admitted immediately with HELLP Syndrome. ~ Kristen 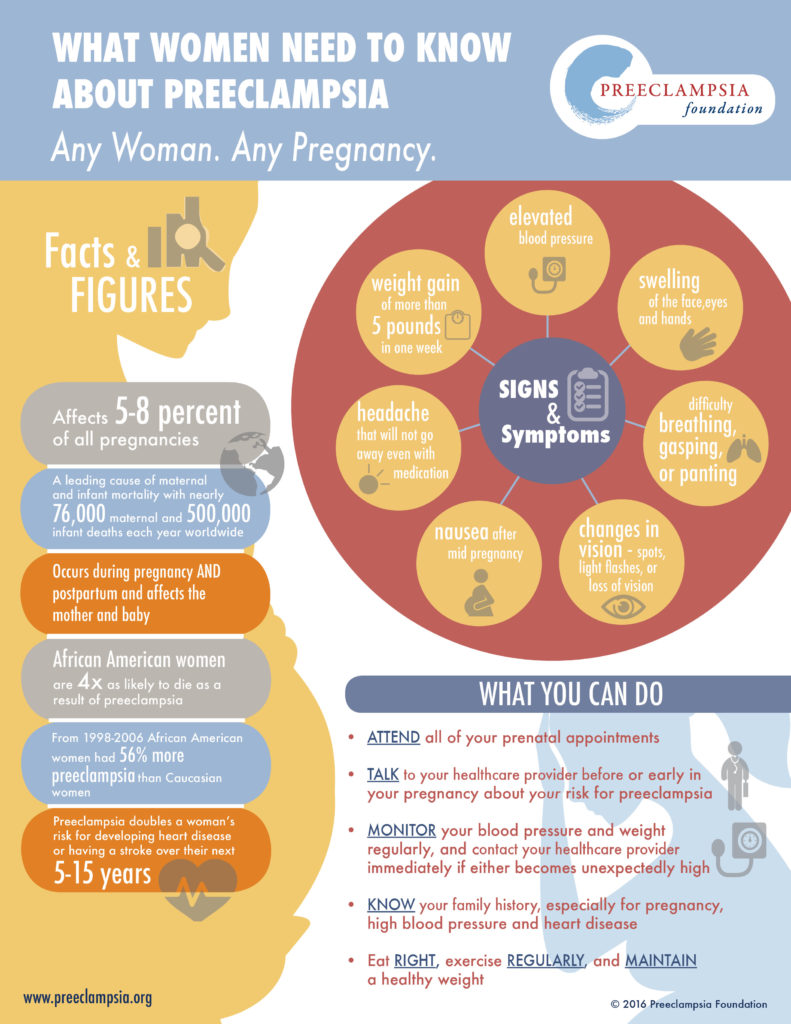