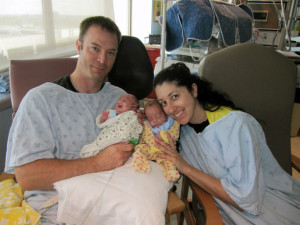 To connect with Preemie Parent mentor and author of this post, Jimena, visit her page here.

My story begins early on in my pregnancy.  At 14 weeks I began to bleed and rushed to the hospital thinking the worst. I was diagnosed with a partial placenta previa. For those who don’t know, it’s when a portion of your cervix is covered by the placenta, basically baby A had implanted on my cervix and so whenever his umbilical cord would pull on my cervix, I would bleed. Sometimes small bleeds other times, full on hemorrhages where I almost passed out from loss of blood.

The doctors kept telling me how previas normally fix themselves. As the placenta grows, it pulls away from the cervix and your issues are resolved. Of course that wasn’t the case for me, as I had two babies and baby B was lying across. He took up any room (and chance) that baby A would have to move up at all, so my partial eventually turned into a complete previa.  I spent 14 weeks in bed – two weeks at the hospital I had wished to give birth in and twp weeks at a high risk hospital I eventually would give birth in. I hemorrhaged 7 times in 14 weeks – 4 of those times it was enough for me to almost black out. At 26 weeks gestation, the doctors gave me the preventative steroid shots and prepared us for the big possibility of these babies coming early given my track record thus far.  The last hemorrhage luckily happened while I was on strict bed rest in the hospital so the doctors quickly came and decided for my safety, it was time to take the babies out. I had just celebrated 28 weeks gestation. 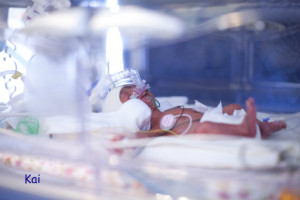 After an emergency C-section, Kai R. Guild was born weighing 971 grams. One minute later; Matteo J. Guild came into the world weighing 2.1 lbs. They struggled to breathe on their own and needed the help of a ventilator.  Sadly, as is the case for most if not all, micro preemie births, I was not able to see them right away since they had to be rushed into an incubator. My husband was able to go see them right away while I stayed behind to rest. I had mixed emotions knowing that 2 little babies had come out of me and neither had been able to take advantage of the kangaroo care I had always envisioned. It wasn’t until 24 hours later that I was able to visit them in the NICU.

There aren’t enough words to describe how gut wrenching it is to give birth and then be discharged from the hospital empty handed. 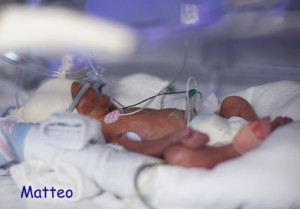 Matteo spent 3.5 months in the NICU while Kai spent 4 months. Visiting them felt surreal. We didn’t feel like they were ours. I didn’t feel like a mom. It wasn’t until the twins came home that we finally were able to feel like we were parents. They were truly ours, our children.

The NICU roller coaster was a blur. It’s been almost four years and my mind has somewhat blocked out a lot of the terrible situations we had to live through. Both needed to be on a ventilator for the first few hours to stabilize them.  Kai (baby A) was the smaller of the two and suffered more of the punches during those 4 months. They were both born with a PDA (a potentially serious condition in which blood circulates abnormally between two of the major arteries near the heart due to the failure of a blood between these arteries to properly close). In some cases, the hole is too large and permits too much blood to pass through the lungs, which places extra strain on the heart, forcing it to work harder and causing a rise in blood pressure in the arteries of the lungs (it can require heart surgery to correct it). Matteo’s PDA closed with the help of medication but Kai required surgery when he was a month old to correct it.

Kai also developed an awful double inguinal hernia in his groin. I could tell he was suffering a lot and eventually we pushed for his surgery to be bumped up.  He was like a different child once he had the surgery. Matteo ended up contracting pneumonia and was again intubated for a week. The twins struggled with feeds a lot. We tried multiple times with Matteo to get him off his NG tube and finally close to discharge he started taking feeds orally. Sadly because Kai was on CPAP for many more weeks than Matteo, we couldn’t try oral feeds with him until he was stable. Even when he was stable, he struggled with the feeds and would refuse them orally. At one point after Matteo was discharged and Kai reached his “corrected age” of a newborn, the NICU transferred him to the children’s hospital down the street. They allowed us to take Kai home with his NG tube after properly being trained on how to administer feeds and change his NG tube monthly.  Bringing them home close to Christmas was amazing. 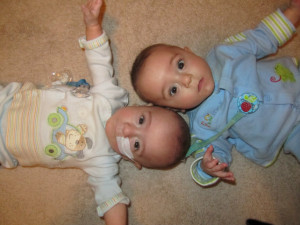 My husband had accepted a new job shortly before I gave birth and so was unable to take time off to help me at home so I struggled basically on my own (my in laws lived over 12 hours away and my parents were still working full time) not only having to manage learning the ropes with 2 preemies but one being on a strict 4 hour feeding schedule via his NG feeding machine. I won’t lie, there were many days I would break down as soon as my husband got home. I was mentally drained on a daily basis. Luckily, after a month of being at home, the children’s hospital provided in-home nursing services for 12 months 2-3 times a month to assist with Kai’s feeds.  Kai did not improve with his oral feeds and we were referred to an OT who specialized in feeding issues. She diagnosed him as having severe oral aversion. He would not take a bottle or a breast. Everything had to be through his NG tube. We had OT once a week for 12 months and by the end he had begun to take some food orally. We discovered he preferred to feed himself. Otherwise, he’d refuse it.

Once I went back to work, we lost the nursing and OT services and relied on our learned skills and our daycare provider to assist us. Slowly Kai began to improve and one day while playing with Matteo, he pulled his NG tube out accidentally and we decided to not put it back in and attempt to see how well he did. With the help of his dietician (who also came weekly to weigh him and assess his diet), we slowly began to see improvements. After two years on an NG tube, Kai finally kicked it for good!  We were so happy! Changing the NG tube was awful, I always had to hold him down while my husband would fish the tube from his nose into his stomach. He hated the experience and I couldn’t blame him for it. We were more than happy to be rid of this part of parenting!

Kai is a completely different child now. Luckily he has no recollection of his NG experience and is an amazing eater – better than his brother!

We are almost discharged from all specialists. Our only specialists are cardiology, speech therapy (delayed speech brought on by their prematurity), and nephrology for Kai’s constant calcium build up in his kidneys (also brought on by prematurity). We’ve happily said goodbye to NICU follow up appointments, OT services, Physiotherapy, blood pressure medication, NG tubes, reflux medication, pediasure to increase weight, nursing services, and the dietician.

We’ve come a long way and looking back, I couldn’t imagine where we’d be today. The future looked so grim and we felt so alone. This is why I want to let other parents know that you’re definitely NOT alone and we are here to listen and let you know that we’ve been there!