Three am is the loneliest hour for most of the world. It’s too late to call it bedtime, and too early to be morning. There is nothing but still darkness among the moonlight and even crickets catch up on sleep. For others though, it’s an exhausting hour spent feeding fussy babies. These lucky few often fumble  through the motions: diaper change, milk, burp, milk, spit up, milk, burp, repeat. Sometimes, time stands still long enough to forget the sleepless night and enjoy the moment. Last night, I was fortunate enough to find that joy.

After a particularly vomit-tastic filled feeding, our Finley girl was wide-awake. Failed attempts at signing, bouncing, classical music, and an infant massage brought me to a face-to-face conversation with this tiny person asking for solace. I promised a pony, a trip to Disneyland, a truckload of candy, a diamond encrusted pacifier… bargaining anything for the gift of sweet sleep. Those big baby blue eyes looked up at me. I continued with words I’ve said before- 47 times in the NICU and 33 days at home; “Mommy loves you so much. I’m sorry I couldn’t have kept you inside longer. You are my sunshine and I will always be here for you.” With eyes locked on mine, she shined a genuine, gummy. smile.

My eyes and heart wept for this three-month-old girl of mine, who should have been born tomorrow. Instead of feeling her roll in my stomach, I feel her wiggle in my arms. Instead of labor pains, I felt the burn of magnesium coursing through my veins. Instead of a natural birth, I hugged a stranger while a spinal block was placed before a C-section. Preeclampsia robbed me of these things (and more) but it gave me three extra months of memories spent with my daughter – a gift I will forever be grateful for.

September 8th was supposed to be the happiest day of our lives. After a picture perfect pregnancy since we found out about our little peanut in January, my husband, Joshua, and I were going to welcome our first-born daughter into the world. We planned on using no pain medication, assisted only with the tools learned from our natural birth classes and yoga sessions. We even hired a birth photographer to capture every beautiful moment that is natural childbirth.

After we both graduated with our MBAs on May 31st, the remaining summer months during this pregnancy was planned to the T; painting the nursery, baby showers, hospital tours, breastfeeding classes, birthing classes, and baby makes three classes… although this pregnancy wasn’t “planned”, everything else was going to be dialed in. We are going to be the best, most prepared parents.

And then June 17th happened.

I woke up nauseous which was not unusual since I had been the entire pregnancy. However, that day was different. I tried to push it out of my mind as I was going to take an entrance test later that morning to further my education. After taking and subsequently failing the test because I couldn’t focus, my anxiety skyrocketed. A phone call to my husband lifted my spirits enough for me to drive home. He suggested going to my regular yoga class might help decrease my anxiety and ease my nausea. I made it through the 7:30pm class, but not without pain in each pose from the torturous swelling on top of the nausea. I raced home after class and found myself throwing up uncontrollably. Josh went out to get me saltines and sprite. Nothing would stay down, including water. Three hours later, while still clinging to the toilet, I heaved and my whole abdomen started to cramp. The pain was something I had never felt before so labor was my first thought. I put it out of my mind, reasoning it must just be pain from the stress and heaving.

Fifteen minutes passed which brought searing pain in my upper right abdomen and back that made me immobile. I called the advice nurse just to check since my water hadn’t broke. I explained the pain was constant, not really like the rhythmic labor cycle I had heard about. I also made sure to mention I had just had a regularly scheduled 28 week prenatal apt two days ago where everything, besides an abnormal amount of weight gain, was fine. Unsure what to do, the nurse checked with a coworker who said it was probably best to come in.

Off to the hospital we went with nothing but our cell phones, wallets, and clothes on our backs.

At 11:00pm, we arrived at the Labor and Delivery triage. My first blood pressure reading: 190/110. Not good – AT ALL. After a urine sample the doctor came in and explained; “Your blood pressure is in stroke territory. There is protein in your urine. We think you have Preeclampsia but we will do a blood test to rule out everything else. Regardless, we are going to admit you to bring your blood pressure down”.

Preeclampsia? Isn’t that for people with high blood pressure?! That’s not me! I must just be having an anxiety attack. Joshua quickly looked up what having Preeclampsia could mean and none of it was good. I knew then I would not be leaving this hospital pregnant.

At 11:30pm: I was admitted to the Labor and Delivery ward. They gave me a magnesium sulfate drip to prevent a seizure or stroke. The doctor confirmed with blood work I was suffering from Preeclampsia. He also delivered the news that, worst-case scenario, we will be having this baby within 48 hours. Best-case scenario, they will keep in the hospital for as long as possible since she is so premature. The wave of emotions can’t be put into words.

Nurses gave me a steroid injection to speed up her lung development. Josh and I start to realize our fate. Our daughter will be born at 28 weeks!? Her chances of survival are so slim! We are going to lose her. We were absolutely heart broken. Instead of sleeping through the night, we sobbed at our unknown future.

Little did I know, this was a life and death situation.

Doctor came in to let me know the labs looked worse and the only sure to save my life was to deliver her. She lets us know the C-section will be scheduled for 9am…. In 3 hours we will be having this 28+2 week baby. They give me another steroid injection to help speed up her lung development. We were in shock.

I couldn’t help but feel the guilt bubbling up. My body was failing our daughter. Evolutionarily speaking, I had one job as a women- to carry offspring- and I couldn’t do it. Our love couldn’t save her. If these next few hours didn’t go our way, my husband will lose his wife and daughter in one horrific swoop. If I survive and she doesn’t, how will I ever overcome the insurmountable loss of a child? The fear crippled us in a heap of tears on the hospital bed.

The next three hours were a blur. Doctors of all specialties came in to describe what we were going to go through. NICU doctors explained our impending journey. I asked if we would hear her cry when she is born, remembering TV shows where that was a big deal. She said no… that her lungs would be too immature. I mentally prepared myself for that heartache. Friends and family came to support us and at
9:00am, I was wheeled back for surgery.

There was calm surrounding me as the nursing staff hastily prepared me for surgery. “Old” me would have had a panic attack right there in the operating room. “New” me knew I had to be strong for Finley. She was giving me strength to breathe, to be OK with this moment. Finally, at 9:29am I felt the tug and indescribable release of her from my numb body.

Looking back, the destructive whirlwind of Preeclampsia could have been much worse. My levels were up and down throughout my hospital stay but I was eventually discharged after six nights. Although my daughter and I were spared, the psychological toll this experience took is still hard to overcome. Postpartum depression (PPD), Posttraumatic Stress Disorder (PTSD), and anxiety are a part of my post partum recovery as we made the journey through the NICU and transition home. Our journey wasn’t easy, but it’s our story.

Born 12 weeks premature, Finley was (and continues to be) victorious. 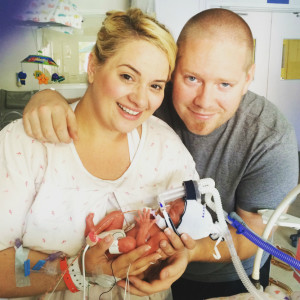 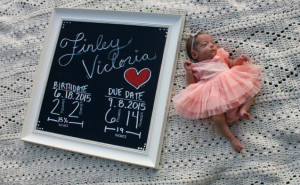