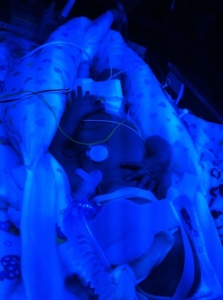 When we were in the NICU they told us we could bring a stuffed animal and anything else we wanted Dusty to have in his area of the NICU. Since I had played music when I was pregnant with him, I figured the music might help him in the NICU to create a familiar sound. They played music for him from the time he arrived to the day we left. The radio moved around the NICU with Dusty.

Some of my best memories of the NICU are the nights that we would go in and Dusty would be fussy so my husband would pick him up and sing “Jesus Loves Me” and it would sooth him to sleep.

ABC News did an article about music in the NICU last May. Their article state that Research finds that music has become an important new ally for babies who are born too soon and struggle to breathe and eat. Music helps these preemies to develop and grow outside of the womb even when they are too small to touch.

I believe that music can be helpful to preemies development. Music is medicine to these small babies that need all the help they can get. To this day, Dusty loves everything music from drums to singing himself to sleep at night.