Preemie Blogger Amber: Tips for Transitioning Home from the NICU

My son was born 10 weeks early and weighed 4lbs 9oz. My husband and I were terrified. We didn’t know what to expect and had so many questions. During our NICU stay and after coming home I’ve been asked multiple times, what was the hardest part of the NICU? Personally, it was all the up’s and downs of the NICU. I can’t tell you how many times I would get excited over the small victories only to turn around and take two steps back.

I remember some people would tell me “once you get home and he’s off all the machines everything will be fine.” But you know, it’s totally different once you’re in that moment. I’ll never forget the day the Neonatologist told us we would be going home tomorrow.

After all the times we had seen his O2 sats drop or his breathing stop while he was eating, how could we not wonder what if that happened at home? 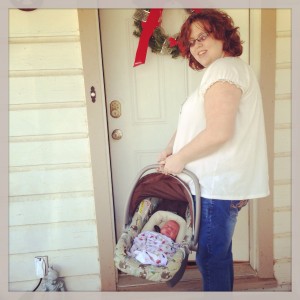 We were blessed enough to be allowed to stay the night in the hospital before we went home with Dusty. The nurses would check in on us every couple of hours so that made the transition slightly easier.

I remember the first night home like it was yesterday. I would wake up about every 45 minutes and lean over to see if he was still breathing. He woke up every three hours to eat just like in the NICU. As scary as all of this was it was also very exciting to have our little one home with us as a family.

If you’re making the transition home from the NICU and wondering if all the craziness gets easier, I can personally tell you it does. Here are some tips for making a smoother transition from NICU to home:

It is such a wonderful time to be home with your little one as a family. They grow up so fast. I’ve learned to cherish these small moments because you can’t get them back. One day they will be all grown up and you’ll find it hard to believe they were ever so small.

My name is Amber Shipman. I am a wife and stay at home mom. I have a little boy named Dustin. I had been diabetic and had high blood pressure all throughout my pregnancy. I was considered a very high risk pregnancy. He was born on 10/11/12. He was 10 weeks premature. He weighed 4lbs 9oz. He spent 47 days in the NICU. We have been through many different challenges and victories in his short little life from getting off a CPAP to learning to walk. I love watching him grow. He is our little miracle. To see his whole journey through the NICU and some updates since being home you can go to http://dustinsjourneyhome.weebly.com