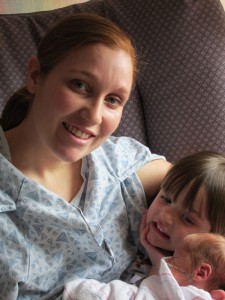 When my first preemie debuted at 34 weeks after a bout with preeclampsia, I wondered why it happened to me. I didn’t have any of the risk factors. I didn’t have a family history of preeclampsia. Sometimes I wonder if I could have done things differently – exercised less, eaten more protein, etc. – would I have made it to full term? Even though none of those things are proven to prevent preeclampsia or prematurity, my brain still fixated on the guilt.

The doctors assured me that it wasn’t my fault, but were they just saying that to be nice? Maybe it was just a fluke, I thought. But a few years later, my second child came early – within two days gestational age of my first child, this time from premature rupture of membranes.

My third child showed up a month after my water broke at 28 weeks.

Thankfully, I learned to process the guilt somewhere along the line. Feeling guilt for something I have no control over is completely unproductive, especially when trying to care for a premature baby in the NICU!

Instead of trying to pin blame on myself or even a medical diagnosis, I tried to make the most of what I could control: pumping every last drop of breastmilk for my preemie, giving my preemie as much skin-to-skin time as the doctors would allow, changing as many diapers as I could, staying up-to-date and informed about my preemie’s condition, and resting so I could physically heal. Because someday when my preemies become big and strong, I want that to be my fault!