This post was written by Gay Molise, our Grandparent Mentor volunteer. For more information on how to connect with another preemie grandparent, see below. 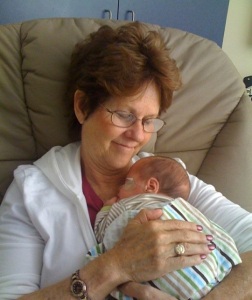 I have a great deal of experience with pregnancy, childbirth and loss. I am a parent of two living children, four children who are in heaven, and grandmother of two little rays of sunshine – but we almost didn’t have either of them. 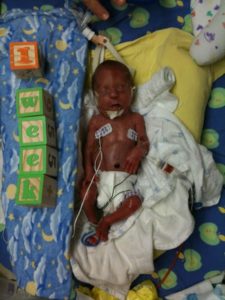 My first grandchild, Wilson, was born at 26 weeks, 1 day, 2 lbs, 3 oz. He arrived two days after Mother’s Day, after my daughter-in-law started premature labor that weekend. She held on to him long enough to get the steroids that helped him get through the NICU experience in pretty good shape. He had a PDA, pretty significant A’s and B’s, minor brain bleeds, had minor ROP that resolved itself and of course jaundice, so he was under the lights for quite awhile. 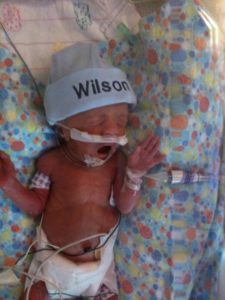 We had one frightening experience where a night nurse took him off his monitors to do something and didn’t hook him back up. He had an apnea episode and no one noticed immediately due to the monitor issue. He had to be bagged – we didn’t find out about it until the next day, and as it was only about a month after birth it was very scary, with no way of knowing what kind of issues he might have from the situation. We were on pins and needles until the next schedule assessment, which fortunately didn’t show any brain abnormality as a result of that episode. 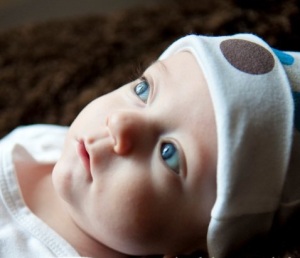 He was in the NICU for 90 days, leaving a couple of weeks before his due date. He’s now a thriving little boy who just celebrated his 4th birthday with a rollicking Angry Birds party.

My son and his wife were pretty sure their million dollar baby would be their only child. They were fairly shocked, as were we, when they found out they had another on the way. My daughter-in-law’s subsequent pregnancy gave us a few scares and a couple of false alarms, but Shelby hung in there until close to 37 weeks and is doing wonderfully at 18 months.

Before becoming a preemie grandmother I didn’t have any experience with prematurity but I did know stress and I did experience loss.

My pregnancy with my first child, my son, the father of Wilson and Shelby, was uneventful and he was induced at three weeks past his due date. When he was about 5 months old we discovered he had a corrected urinary tract anomaly and would have to have surgery, which he did successfully at 6 months. Sadly, over the course of the following few years I had a miscarriage, another pregnancy where my little boy was born with significant issues and died at two weeks, an ectopic pregnancy (where I lost a tube, and was told it was unlikely I would get pregnant again, and then when I finally did, another miscarriage. At that point I was in my early 40s, my son was in high school and I resigned myself to being the parent of an only child. Lo and behold a year or so after that final miscarriage I was pregnant again. I was 45 and my doctor monitored me very closely, and when I was about three weeks from my due date, he induced my daughter. All was well and she is a smart, accomplished 19-year-old college student today. I am well acquainted with the pain of losing a much hoped for pregnancy, and I am way too familiar with the pain of losing a child. That feeling of loss never leaves you, it just moderates eventually and you go on.

When we realized that Wilson was likely going to arrive so very early it was a blow so much like I’d experienced with my own pregnancies and children that I had to reach very deep to be able to help my son and his wife through his birth and 90 day NICU stay. I think that without the previous experiences I had with dealing with the stress, fear and grief that it would have been much more difficult for me to really know the kinds of things that they would be experiencing.

Are you a preemie grandparent who would like to talk to another grandparent who has dealt with prematurity? Our Grandparent Mentor, Gay, is here to listen! Click here for more information on the program and on getting in touch with Gay.

About The Author: Gay Molise