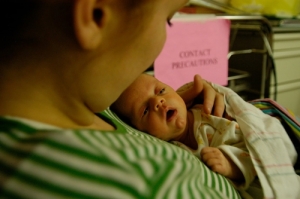 Just when I think I have things figured out, that is when everything changes. When my daughter was born at 34 weeks and rushed to the NICU, the first few days were rough. The room was crowded with incubators and worried parents, doctors and nurses elbowed through to round on their tiny patients, and I felt helpless as my daughter struggled to do what I thought normal babies should do.

After a few days, things slowed down. My daughter eased into a routine of sleeping and diaper changing and feeding. I followed suit by coming at regularly scheduled times and taking care of her as much as I could. The nurses knew when to expect me and would pull a recliner over to our little station.

Right about then, the doctors approached us to see if we would like to move to a step-down special care unit at a hospital closer to home. We coordinated the transfer and within a few days, she was a few miles closer. Once again, it took a few days to settle into a routine. And once that happened, our preemie caught a flu bug.

She spent the next few days on contact precautions – secluded from the other babies and touched only when the handler was sanitized (and gowned up when not momma). Upon recovering from the flu, she developed apnea and spent the next few weeks teasing us with her occasional episodes. Throughout her NICU stay, I had moments when I thought I knew what I was doing – but those moments were always followed by uncertainty and sometimes sheer terror!

Almost five years later, my concerns are different but that sentiment hasn’t changed: just when I think I have things figured out, that is when everything changes. All of the tried-and-true parenting strategies I used on my energetic-but-obedient first child are irrelevant with my strong-willed second child. My normally calm third child recently found fun and adventure in unrolling toilet paper rolls, unloading book shelves, and throwing food across a room.

Preemie parents, stay on your toes! Those preemies are going to keep you busy, and you are going to have to learn and re-learn how to handle them!