Preemie Mom Jennifer Talks About Why (and How) She Supports Us

I just wanted to share my excitement of what a success it was putting “in lieu of gifts a donation to Graham’s Foundation would be greatly appreciated” on our daughter, Juliana’s 1 year home celebration invitation! I emailed Laura Martin right away to share my excitement after at LEAST half of all who came wrote in their cards that they made a donation! I also got a phone call yesterday from a friend who attended Juliana’s party and was so touched by the information I shared about Graham’s Foundation that her mother-in-law is going to knit baby hats to donate for the care packages! 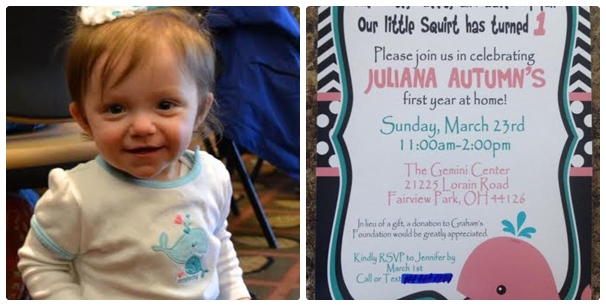 I initially learned about Graham’s Foundation from one of my mom’s coworkers who told me to go online and request a NICU care package after I had my 29-weeker. I waited like a little kid in the window anticipating the arrival of the package because like most all preemie parents I felt as if my baby and I had been forgotten by everyone. Unlike a term birth, there were no visitors, no balloons, only a few “congrats” cards and gifts. It was lonely.

When the package arrived and I opened it up, I felt love and happiness! The hat was my favorite, because it drove home that my child was here, it was a time to celebrate, and she was a miracle. From that moment on I knew once my life returned to our new normal that I wanted to learn more about Graham’s Foundation and how to spread the word about this great organization. The more I learned, the more I was impressed.

So when I was planning our homecoming anniversary celebration I thought, “Juliana doesn’t need anything right now, I would much rather people donate to an organization that made such a difference in my life.” No joke, only a week or two after we added the donation information to the invitation, I got a call from my friend Holly who invited me to a meet and greet with the Graham’s Foundation board. I gladly accepted though I wasn’t sure what to expect, but when we got there I was blown away!

It was an absolute honor to speak with Nick and Jennifer Hall, share my story, hear theirs, and answer some questions. I even told Nick about Juliana’s party invitation and how I was requesting donations for Graham’s Foundation in lieu of gifts. It was wonderful. I was filled with so much passion for this cause that when I left that I made it a personal goal of mine to help raise money and awareness. So of course I was then so excited when the party came and at least half of all our guests’ cards said that a donation had been made.