A Preemie Mom to Preemie Daughters

This story was shared with us by preemie mom Emily. To share your own story, click here.

The NICU has been with me since the day of my birth. I’ve known that colloquial acronym for the neonatal intensive care unit for as long as I’ve known a child’s basic vocabulary, because I spent ten weeks there as an infant.

I never expected I’d be in one again, twice, as a parent to my own premature daughters.

I was born twelve weeks early, in the late 1970s, weighing 1 lb 15 oz, or 858 grams if you want to put it in the terms of the neo-natal intensive care unit. I stayed in the NICU for ten weeks, experiencing the stories that shaped my childhood questions to my mom of “tell me again about when I was born!” I learned that I’d had to learn how to breathe on my own, that I’d nearly died more than once, that doctors and nurses (always the heroes of the stories) had saved my life more than once, and that priests had baptized me more than once, just in case. I learned that the scars on my neck came from feeding tubes, and that the roughness on my heels served as a reminder of weeks and weeks of heel-prick blood draws. I learned that the one picture of me in my baby book – head too large for my body, skin too dark, eyes too wide, even though it was my homecoming day – didn’t look anything like the pictures of babies I saw everywhere else. I learned, too, that preemies are survivors and fighters, that life isn’t always easy for us, but we cling tenaciously to what we fought so hard to achieve.

When my own kids came along, larger and healthier and with far shorter NICU stays than I myself had faced, I broke all the rules.

My first daughter, now a happy and thriving seven-year-old, was born at 4 lbs, 9 ounces, at 34 weeks and 6 days gestational age. One more day, or a few more ounces, and I could have taken her home with me. She breathed room air, and nursed just a bit on her second day. I understood they had to prick her heel; that was how preemies had their blood drawn. But did she really need an IV tube in her head, the only place they could find a vein that worked. She looks so healthy, I kept insisting to anyone who would listen. I was too tired, too stressed, too stunned that an otherwise pretty healthy baby could still be a preemie, to see that the nurses needed to let me relax and let them do their jobs.

When we brought her home after a mercifully short 9 days, I nursed her as much as I could, switching her off bottles as her strength increased, until almost all her food came direct from the source. We took her on a stroller walk on a glorious fall day just 2 days after she came home. I carried her around town in a baby wrap, and people wondered at the tiny creature, smaller than most newborns, tucked safely inside. I took her to the grocery store, the mall, and to a fiber arts conference. Her grandparents chided me, reminding me that someone so small needed to be protected from germs, sheltered, until she was stronger. She nestled against me in her carrier, secure, content. 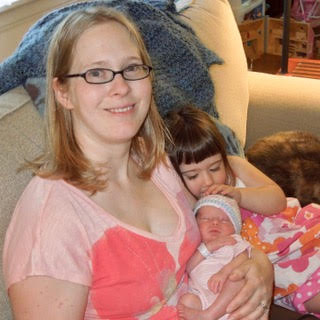 Around three years later, I became pregnant again. No one expected another prematurity, but once again, there was another premature rupture of membranes, another wee-hours trip to the hospital, another emergency c-section, except this second baby was even smaller and even earlier than her big sister. At 33 weeks and 5 days gestational age, weighing 3 lbs 10 oz, she weighed almost twice as much as I had at my birth. Breathing room air but still very small and unable to maintain her temperature or weight, she spent her first two weeks in an isolette. Tubes ran up through her lingering stub of an umbilical cord, delivering precious nutrients so she could grow.  Eventually they switched her to an NG (nasogastric) tube, going down her nose and delivering the precious colostrum and milk I’d started to produce directly to her stomach. I touched the scars on my neck. They itch sometimes, and occasionally people ask me why I have them, but for the most part, they’re no more noticeable to me than a freckle.

The night before my own discharge from the hospital, knowing I was leaving yet another baby in a doctor’s care, I squeezed colostrum onto my freshly-washed pinky finger, and put my finger in her tiny pink mouth. She latched on immediately and sucked eagerly at the finger that tasted of milk. Leaning on the isolette, I cried tears of relief as I felt the strength of her lips closing around my finger, the strength that they’d need to pull life-giving milk from my body. Deep inside, my maternal hormones knew from that suck that, no matter the tubes and machines that stood in our way now, soon we’d be all right.

After my younger daughter’s discharge, I broke the rules again. I wrapped her in a gauzy wrap and took her to the local botanic gardens, her tiny feet sticking out at the bottom. We went to summer music festivals, and she slept as her sister danced to the strains of Beethoven and Tchaikovsky. At three months old, we flew on an airplane to celebrate my grandmother’s 90th birthday. But when she needed extra help crawling, walking, and talking, we contacted early intervention services, and got her the help she needed.

There’s no rule book to being a former extremely low birth weight preemie who becomes a parent to her own preemies. My daughters and I made the rules up as we went along, but some rules stay the same no matter the parent, no matter the length of NICU stay: preemies are fighters and survivors, and we grow up to lives marked by prematurity, but never solely defined by it. All the tubes and nights of worry turn into lives of determination, strength, and love.