My preemie was born at: 26 weeks and 5 Days
Days spent in the NICU: 120 Days
Parent of Multiples: No
Our NICU Journey included: Having a preemie during COVID and NICU stay during the pandemic, PDA closure, IVH, ROP, Breathing support (multiple intubations, CPAP, Hi Flow oxygen, home oxygen), NICU switching, Dads of preemies.

The NICU journey is a lonely path. So many sleepless nights, agonizing moments and hours
after hours of just me and him in the room left me physically, mentally and emotionally spent. Thanks to the ongoing pandemic, we were limited to only Mom and Dad able to visit our little Jellybean. This only furthered the feelings of isolation and that we were in this by ourselves. Well-meaning friends and family tried to help but could not begin to fathom what we were going through. Connecting with a parent mentor gave me someone who had experienced the fears and joys that I was going through and let me know we weren’t alone. Separated by time and distance maybe, but they were there.
That’s what I want to do. Help parents know that they aren’t alone.

What I remember most about our NICU journey is in the beginning it was only fear. Fear for my son. Fear for my wife. Fear of the unknown. The thing is, the fear didn’t last. Once I put my finger in his little hand, sang to him and got my first cuddles, that fear was replaced with nothing but love.
Yes, there were plenty of scary times through all the alarms, multitude of procedures and roller coaster of the day, but sitting down next to his isolet to read to him, singing songs or holding him until the wee hours of the morning made everything right in the world.
I remember all the nurses and doctors that were patient with us as we experienced every possible emotion every day. They celebrated with us, worried with us, and became our family.

I want all other preemie parents to know:
-Just Breathe.
-Never pass up the opportunity for cuddles. They’re good for them and you.
-Get smart. Learn all you can about what is going on. Once you understand it becomes much
less scary.

The word we most often see associated with dads coping with prematurity is strong. Fathers in the NICU and beyond are described as the walls that hold up the world around mothers, babies, and whole families. What we seldom see acknowledged is that dads of preemies may feel just as terrified, overwhelmed, and confused as their partners, but they’re not encouraged to share these emotions. Many dads are “fixers” – they want something to do. While there is plenty dads can do, premature birth is an issue without an easy fix. 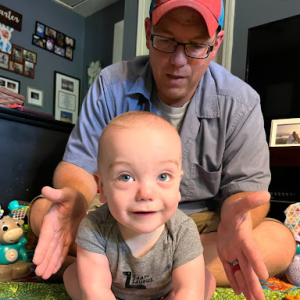