My preemie(s) was born at: 25 weeks
Days spent in the NICU: 75
Current age of preemie(s): 5
Parent of Multiples: No
Our NICU Journey included: IVH, ROP, Breastfeeding a preemie, Going home on an apnea monitor, Pregnancy after preemie, General preemie support.

When my son was born at 25.5 weeks in 2012, I had never met anyone who had delivered a preemie, let alone a micro-preemie. I felt entirely alone and lost. After a 75 day NICU stay, we brought our little miracle, Owen, home from the NICU. Despite bilateral grade IV IVH, ROP, PDA and many other issues, he has been amazingly resilient and is now a stubborn, smart, and happy three year old boy. Very soon after we brought him home, I knew I wanted to do something to help other preemie parents like me. Those who felt completely isolated with little to no support from other preemie parents. As coordinator of the Graham’s Foundation Parent Resource volunteer program, I want to make sure no mom or dad ever feels like they are alone in the NICU. I am not a therapist or a doctor, but I know what it’s like to watch your child struggle for every breath, to watch a machine sustain his little body while you stand helplessly beside an incubator. I know how powerful the drive to protect this baby that you can barely touch will motivate a new mom to sit beside an isolette and pump for hours for just 5 ml of breast milk. And how the love and fear for your child can be so overwhelming that you can’t breathe. These are things that no one can truly understand unless they have experienced them.

An IVH diagnosis is often as confusing as it is frightening for parents of preemies because it’s so very difficult to predict short-term and long-term outcomes with a baby still in the NICU – or even until well into toddlerhood. 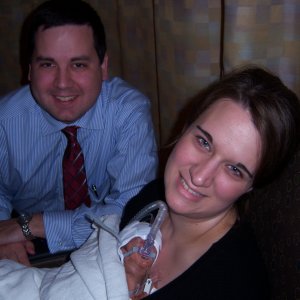