Elena and her family had a NICU stay that by some people’s measures could be called short, but we know that leaving your preemie or preemies in the hospital when you’re discharged is always heartbreaking. Her story, in her own words, appears below. If you’d like to share yours, email christa@grahamsfoundation.org.

In July of 2012 my husband and I found out we were expecting twins after years of trying with fertility assistance to get pregnant. I had a relatively easy pregnancy and then at 28w 4d I started to have contractions.

I was admitted to the hospital and they worked to stop my labor. I was on hospital bed rest for three weeks before they let me go home to be on home bed rest. 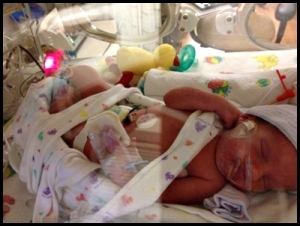 But a few days later I started having strong contractions and my husband rushed me to the hospital. I was 10cm dilated and was taken in for an emergency c-section. Our little ones were born at 32w 1d. They both weighed in at 4lbs 3oz.

Amelia was on room air and doing well. Our son Alex required oxygen, but came off it quickly.

They were considered feeders/growers so we just waited for them to mature enough to come home.
Amelia came home first after a 3 week hospital stay, but our son was still having bradycardia spells. It was tough having one newborn at home and having the other in the hospital, but finally after almost 6 weeks in the hospital Alex was able to come home. 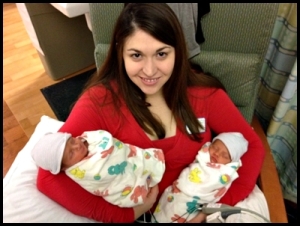 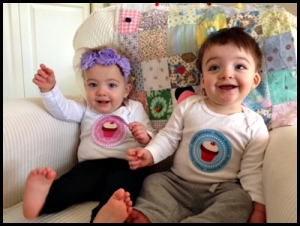 Our Little ones just celebrated their 1st birthday and are doing really well.