Becoming a parent is a wonderful and somewhat scary process all at the same time. For my husband and me, our emotions were felt three times over. After years of trying to start a family, we couldn’t wait to give our triplets all of the love we’ve been waiting and praying to give.

Our excitement turned to fear the day we delivered our beautiful babies at just 24 weeks and 1 day. Our whole world stopped on April 8th, 2014. Our daughter Olivia passed away shortly after she was born. Our daughter Ainsley and son Brenner were both receiving breathing support. Ainsley needed a blood transfusion and developed P.I.E. which is a lung issue. 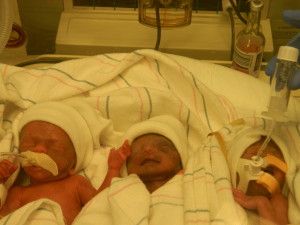 The NICU was a world I knew nothing about. My husband is a paramedic, so he was able to understand what the machines meant. He would re-tell me what the doctor said in terms I could understand after they gave us updates on our babies. I wondered if I would ever be able to comprehend what was happening with my own children.

Late on April 10th, our world had finally begun to spin slowly again. We decided to go up to the NICU from my hospital room to tell our children goodnight. They had both already developed personalities. Ainsley developed spunkiness and Brenner was easy going, nothing bothered him. As we went to leave, we noticed something happening in Ainsley’s room. We would end up standing in the hallway, watching doctors and nurses try to resuscitate her for over half an hour. Our world had come to a complete halt.

The doctor asked if we wanted to hold her or have them try again. We decided to hold her while she passed. In the early morning of April 11th, we kissed our daughter and held her tight as we said goodbye.

Being discharged from the hospital was very difficult. The fear of not being in the same hospital at all times in case he needed us was almost too much to bear. We felt that it was just a matter of time until Brenner passed away as well. I left the rest of my heart at the hospital that day.

On May 31st, we laid our daughters to rest. The outpouring of support from our families and friends was amazing. However, people tend to say the wrong thing when they think they’re saying all the right ones. We received the remembrance packages from Graham’s Foundation and somehow seeing their names etched into the dog tag and plaque made me feel better. I felt as though they truly meant something to people outside of our circle. There were others who knew how we felt. I wasn’t sure if they made me more happy or sad. No parent should have to bury their child. 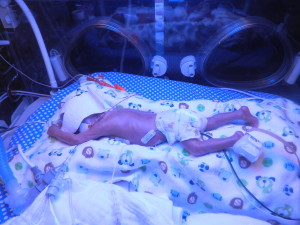 He extubated himself early on from his ventilator. It was signs of the fight to come! He finally became a member of the “two pound club”. I’ve never been so preoccupied with ounces in my life! I couldn’t imagine the day when I would have no idea what my child weighed or be able to count pounds instead of ounces. After 152 days, he was finally able to come home! I began to learn and understand medical talk. We had received a gift box from Graham’s Foundation which became my cheat sheet for different terms and explanations.

Finally in September the doctor called and said Brenner would be coming home…in four days! We scrambled to finish his nursery and prepare our home as much as we could. He is a true miracle! Our world has begun to spin again. It will never be the same, but we have learned valuable lessons from our experience. Never take anything for granted and fight for knowledge. If you’re unsure, ask, or find resources such as Graham’s Foundation for support in all aspects of the journey.

Most of all, hold onto hope.