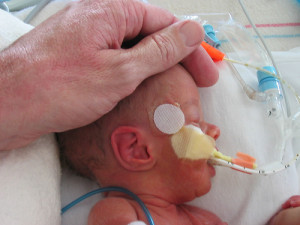 That all parents feel some degree of guilt at one point or another in their children’s lives is simply a truism. Guilt can actually be a sign that moms and dads care deeply about getting it right and want their children’s lives to be perfect from the very start. But while feelings of guilt can come from a positive place in a parent’s soul, guilt itself can be a distraction that leads to problems like depression and anxiety.

For some parents of preemies, feelings of guilt accompanied the birth of sons and daughters . Their children’s lives aren’t perfect from the start – at least not perfect as it is usually defined. Many wonder if something they did caused their children’s extremely early birth or they could have prevented it somehow. Nothing stirs up feelings of guilt quite like watching an infant undergo countless medical procedures or struggle for his or her very life, except perhaps having to leave that infant in the care of others to manage life’s demands.

When the NICU days are passed, guilt can persist. As the medical establishment begins to recognize that, in many preemies, delays and health issues can persist beyond the supposedly magical age of two, some parents feel guilt as they watch their children cope with challenges that may or may not be related to prematurity. When moms and dads of very early preemies need help with complicated day-to-day care or the assistance of occupational therapists and specialists, they may feel even more guilt.

It’s important to realize that even parents of preemies who did everything right, were in the NICU practically around the clock, participate in their children’s care with superhuman gusto, and never seem to need any help feel guilt, too. As noted above, guilt is to some extent endemic to all parents. But so are the potential negative effects of guilt when you let yourself be overwhelmed by them, and parents who are already stressed by the ups and downs of life with a micro-preemie are more easily caught up in the snowball effect of guilt.

Sometimes letting yourself feel guilt can seem like the best way to show you care, but the truth of the matter is that prematurity happens and it can happen for what seems like no reason at all. The NICU is simply a reality and ends up being such a tiny slice of a person’s life. For every hour of bonding missed, there may be years of togetherness. Most infants will have no memory of medical procedures or the tearful goodbyes uttered by moms and dads. And those parents who’ve come to know grief could not have prevented that grief by being stronger or smarter.

In the end, guilt is seldom a useful emotion and the best way to show you care deeply is simply to care. You’ll be better off for having let go of guilt, and your preemie will be, too.