What Preemie Parents Need Most of All

Having a preemie is scary no matter how far along you are when your baby is born. Chances are good your preemie was born unexpectedly. If yours, like mine, wasn’t a high-risk pregnancy, chances are also good that your doctor or midwife never mentioned the possibility of premature birth beyond telling you to call in if you thought you might be in labor.

And then you were in labor and for better or for worse there’s your preemie surrounded by a medical team doing who knows what until finally they rush your baby away.

Premature birth isn’t just scary because you’re dealing with all of the challenges of birth and have no idea what the outcome will be. It’s also scary because it’s so unfamiliar. There is equipment everywhere and you may have no idea what any of it is for. You’re talking to specialists while you’re actively engaged in giving birth (if you’re a mom) or supporting your partner (if you’re a dad or co-parent). Nothing is happening according to your birth plan, if you even had time to prepare one, and then it’s all over and you find out that it may be weeks before you’ll be able to hold your new daughter or son.

Who do you share that experience with? You may have found that the people who care about you most were the least likely to reach out – most probably because they didn’t know what to say or do. If you have friends who are moms or dads of kids born full-term, they may not know what to make of your experiences. 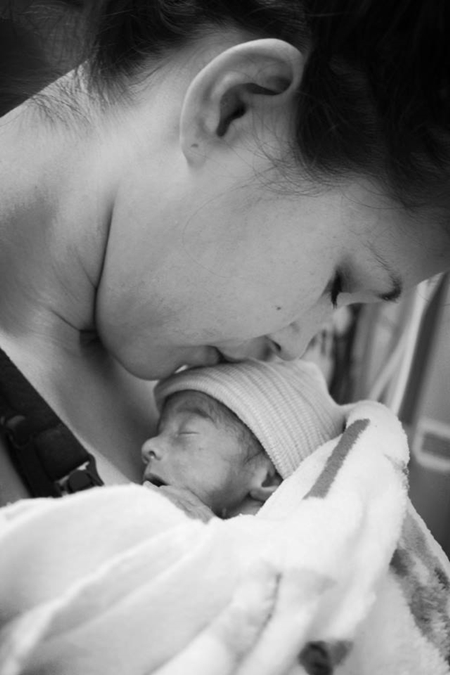 In a report released by Inspire, Keira Sorrells (mother of triplets born at 25 weeks, 5 days gestation, founder of the Zoe Rose Memorial Foundation, and Operations Director & co-founder of the Preemie Parent Alliance) described the early isolation of premature birth like so:

“Unless you work in the NICU or are a parent of a preemie yourself, you cannot begin to imagine what living there day after day is like. A constant state of fear exists as you watch your child struggle to live.  Many parents of healthy newborns will express feelings of fear in bringing their baby home for the first time; they will get up in the middle of the night to make sure the infant is still breathing; they will wonder if they can decipher what their child needs based on their various cries. That fear is increased exponentially for a parent of a preemie because these parents have actually watched their children struggle to live, they have seen their child turn shades of gray and blue as the current form of respiratory support is failing to help them breathe, or they’ve been told that their baby is so sick they are maxed out on all mechanical and medicinal support and all they can do now is wait and see if their baby will turn the corner. When you live in a constant mode of survival, the energy needed to educate those around you who do not understand what you are going through can be in short supply.”

And yet, you’re not alone. Not by a long shot. Premature birth overall is incredibly common and while having a micropreemie is relatively rare, there are thousands of parents out there whose experience will mirror your own. There are wonderful, active communities of preemie parents out there waiting for members like you. There are organizations like Graham’s Foundation, ready to help you find not only a community you can call your own but also a peer-to-peer connection. Not that finding and then forging those connections is easy when you’re tired and scared and physically, mentally, and emotionally drained. But it is worth it.

Studies have shown that moms of preemies who connect with NICU veterans feel less anxiety and depression, which is important because 20% of preemie parents reported losing important relationships while their babies were in the NICU.

Parenthood in general is better when you have support from friends and other folks who understand you. Parenting a preemie is never going to be easy, with or without support, but it is still an experience best shared.

Christa Terry is mom to two rather small but incredibly loud preemies, Communications Director at Graham’s Foundation, and is also one of the founders of Hello Mamas, a web app that helps mom friends meet (even when they can’t get together in person just yet).

About The Author: Christa Terry