About Preemies: The Essential Guide for Parents of Premature Babies

Preemies was conceived unexpectedly, when the authors’ lives took turns they never could have predicted. Dana was a journalist writing for a business magazine in New York and her sister Mia was a neonatologist – a doctor specializing in the care of premature and sick babies—at the University of North Carolina at Chapel Hill. Emma was also a journalist in New York, writing about medical issues for the leading publications in Italy, where she grew up.

Dana and Emma, who didn’t know each other yet, were pregnant at the same time. They expected their pregnancies to last nine months, of course, but before they had even started to think about cribs and baby clothes, they were hurled under the glaring lights of the hospital’s intensive care nursery, delivering their babies almost three months before term. They met in that high-tech world of frail, tiny, and sick infants, where their premature babies were fighting for their lives.

In the beginning, they didn’t know anything about prematurity. Dana’s sister Mia – how fortunate that she was a neonatologist! – spent the most difficult days of Dana’s twin daughters’ hospitalization with her, and Mia’s knowledge and comfort were invaluable. But the conversations with doctors and nurses were never enough to answer the hundreds of questions that Emma and Dana had. When Mia had to leave, she gave Dana and her husband one of only two books on premature babies that were available at the time. It terrified them, emphasizing all the things that could go wrong (but that most parents really don’t have to worry about).

A few months later, memories from the NICU brought Emma, Dana, and Mia together, and from their personal and professional experiences, Preemies was born.It was the book Dana and Emma wished they could have had and Mia wished she could have given: a companion and guide, realistic but reassuring, a comprehensive source of information to be consulted briefly and frequently.

The first edition of Preemies was published by Pocket Books, a division of Simon & Schuster, in 2000, and received great media attention. The authors were interviewed on the Today Show, NPR’s Fresh Air, Nightline, MSNBC, Oxygen, and in the New York Times, among other media. The book became a companion for huge numbers of parents of premature babies and a resource widely appreciated by medical experts, as attested to by the outstanding reviews it has received.

Ten years after the first edition, an updated, second edition was published in November 2010. There is still no other book that covers the physical and emotional issues premature babies and their families encounter as comprehensively, and with such warmth. Preemies is a book for all future parents and those close to them, who will be supported by this information as they both suffer and rejoice in their children’s premature births.

Adapted from the introduction to Preemies:The Essential Guide for Parents of Premature Babies 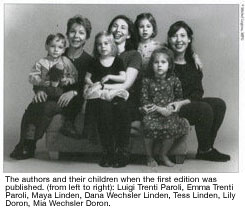