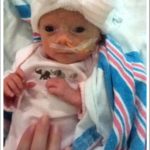 Something as common as premature birth can be an incredibly challenging and transformative experience for mothers, fathers, and caregivers. Jim and Blair Nooney, who were chosen to represent Graham’s Foundation over the course of the year, were formally introduced as the organization’s Ambassador Family at an event earlier this year where they gave a firsthand […]

As Graham’s Foundation grows, so too does our need for dedicated team members who can help us reach as many parents of preemies as possible. Part of how we connect with more NICUs and more preemie parents is through our NICU Ambassador program. Our NICU Ambassadors act as our representatives in NICUs across the country […]