All moms deserve recognition, but we think moms who need support after premature birth deserve an extra smile, hug, and “Great job!” on Mother’s Day because a preemie mom’s journey is harder and longer than most. 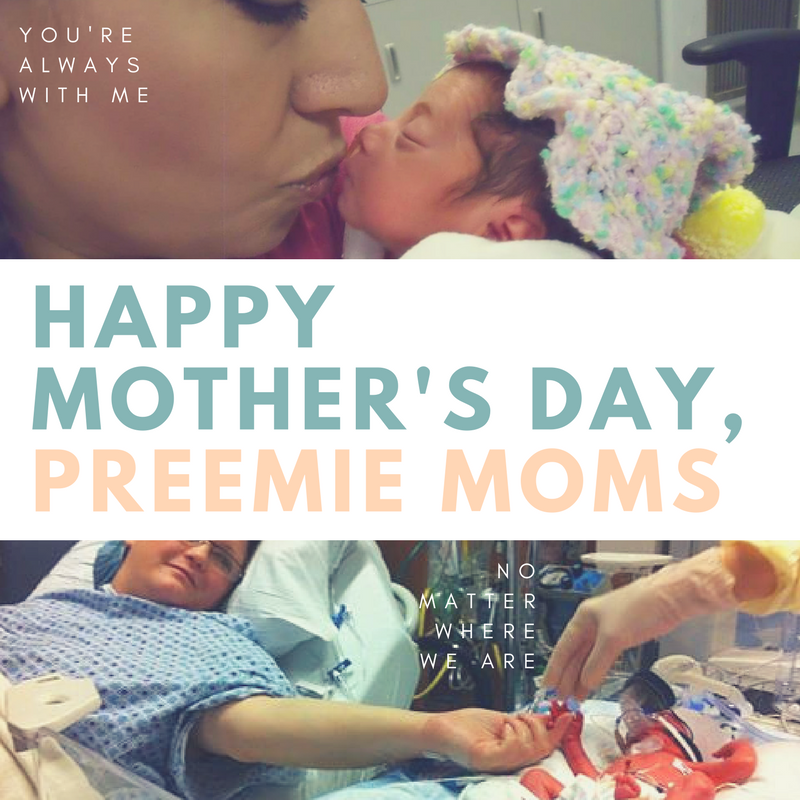 Studies show moms of preemies put their own health at risk to be there for their babies during the NICU days. Preemie moms field personal questions about their birth stories and their children’s health, and graciously listen while people around them struggle to say the right thing and instead say something awkward. Moms of preemies experience a different kind of stress in the third trimester – spending hours in the NICU, listening to monitors going off, pumping, worrying, and being strong when it seems like there’s no strength left.

Preemie moms keep it together so that grandparents and aunts and uncles don’t have to worry as much. Many do without baby showers or the chance to decorate a nursery before the baby’s arrival, and then cope patiently with family and friends who do not understand how complex prematurity really is. Some even take their raw emotions and channel them into good deeds that help preemies and their parents.

Which isn’t to say that the moms dealing with premature birth – including the moms who have had to say goodbye too soon – are strong day in and day out. They worry about bonding with their babies and struggle to find balance. They break down in the car on the ride home from the NICU or from yet another medical appointment. They get frustrated when advocating for their children proves more difficult than anticipated. But no mom is strong day in and day out, and preemie moms are called upon to be even stronger (and more hopeful, more resourceful, and more appreciative) than most.

You’ve probably seen this on other blogs before, but we thought Mother’s Day would be the perfect time to share it on ours. Happy Mother’s Day to all the preemie moms out there!

How Preemie Moms Are Chosen
by Erma Bombeck

Did you ever wonder how the mothers of premature babies are chosen?

Somehow, I visualize God hovering over Earth, selecting his instruments for propagation with great care and deliberation. As he observes, he instructs his angels to take notes in a giant ledger.

Finally, he passes a name to an angel and smiles. “Give her a preemie.”

The angel is curious. “Why this one, God? She’s so happy.”

“Exactly,” smiles God. “Could I give a premature baby a mother who knows no laughter? That would be cruel.”

“But does she have the patience?” asks the angel.

“I don’t want her to have too much patience, or she’ll drown in a sea of self-pity and despair. Once the shock and resentment wear off, she’ll handle it. I watched her today. She has that sense of self and independence so rare and so necessary in a mother. You see, the child I’m going to give her has a world of its own. She has to make it live in her world, and that’s not going to be easy.”

“But Lord, I don’t think she even believes in you.”

God smiles. “No matter, I can fix that. This one is perfect. She has just the right amount of selfishness.”

The angel gasps, “Selfishness?! Is that a virtue?”

God nods. “If she can’t separate herself from the child occasionally, she will never survive. Yes, here is a woman whom I will bless with a child less than perfect. She doesn’t know it yet, but she is to be envied. She will never take for granted a spoken word. She will never consider a step ordinary. When her child says momma for the first time, she will be witness to a miracle and know it. I will permit her to see clearly the things I see — ignorance, cruelty, prejudice — and allow her to rise above them. She will never be alone. I will be at her side every minute of every day of her life because she is doing my work as surely as she is here by my side.”

“And what about her Patron Saint?” asks the angel, his pen poised in the air.

God smiles. “A mirror will suffice.”