Jimena is a twin mom who had a rocky road when it came to her pregnancy – and then her babies had an even rockier road in the NICU. This is Pt. II of her story as told in her own words. If you’d like to share your Prematurity Experience, email christa@grahamsfoundation.org. 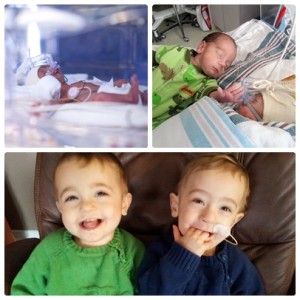 In the hospital with the Level III NICU, they took my vitals and seeing the amount of blood I was still losing, they admitted me right away. After having an emergency ultrasound, it was discovered that my partial placenta previa, had now turned into a complete placenta previa. Meaning Kai’s (twin A) placenta was totally covering my cervix. There was no chance it would ever improve and C-section was unavoidable. I was plugged into an I.V. for fluids and given another transfusion later that night since my vitals weren’t that great. I also received steroid injections which help mature the baby’s lungs in case they were coming early. Two NICU doctors came to talk to my husband and me about the possibility of the twins coming early. That was our first glimpse into the life of a parent of a premature baby.

Their statistics were really scary, nothing they were telling us was positive. Things like the babies may not make it, the very likely possibility of brain damage, brain bleeds, infections, cerebral palsy, etc. I remember tuning them out halfway because the sound of my heart beating was so loud and my inner voice kept saying “why me? Why me? Wasn’t my extremely difficult pregnancy enough? Now to deal with having my babies come early?” As soon as they left, I broke down in my husband’s arms. This is definitely not how one envisions their pregnancy journey to be; filled with fear, frustration, worry and sadness.

At the end of 27 weeks gestation, I was discharged from the hospital bed rest to continue the bed rest in the comfort of my home since I had once again, gone 2 weeks without a bleeding episode. By this time I had had so many ultrasounds (pretty much weekly since week 14) that the novelty of having ultrasounds started to wear off. I had so many photos of the twins in utero I could have easily created a book from week to week (which I did in the end!).

Two days after being discharged, I had another major hemorrhage in the middle of the night. By this time I had gotten used to the idea of wearing sanitary pads through my whole pregnancy as a preventative measure since I never knew when I’d have a bleeding episode. But whenever I had a hemorrhage, I would soak right through them within a few seconds. The blood would gush like an open faucet very scary and so once again I began to feel light headed and felt like I would pass out. I screamed out my husband’s name and again he rushed me to the triage and they again pumped me with I.V. fluids and admitted me. I was a total mess by this point.

I think it had finally hit me, all the emotions I had bottled up from the entire journey so far. I had been really strong through the whole thing but after being stuck in bed for almost 14 weeks, constant hospital emergency visits, 6 hemorrhages and an early birth scare, there is only so much a person can carry on their shoulders and I think I had finally reached my max.

People talk about postpartum depression; I think I had pre-partum depression. I had hit an ultimate low. I couldn’t even hear about other uneventful pregnancies let alone watch a happy pregnant lady walk down the street without feeling total jealousy and anger. I had so far been robbed of everything I had always envisioned. Barely anyone saw me pregnant since I was stuck in bed for most of it. I didn’t get to flaunt my pregnancy like I always dreamed, I never got to shop for pregnancy clothes, and never had pregnancy photos done like I wanted. It was devastating.

That night, once the bleeding had stopped, I had another blood transfusion (my second so far). I was wired awake with millions of thoughts whizzing through my mind there was no way I was going to sleep. I was given a bed pan and told to not get out of bed for any reason. I couldn’t believe I had to use a bed pan! Just the thought alone freaked me out ha-ha! Once my vitals were stable after my transfusion, I sent my husband home to sleep in a decent bed (those hospital chair/beds can’t be that comfortable!!). And reassured him I was fine and would call if anything changed.

Later that night, (August 14, 2011, 1AM) I awoke with contractions. I quickly called the nurse who came to check on me and discovered I was hemorrhaging once again. This would be hemorrhage number 7 and thankfully my last one. The contractions were pretty painful and after having the OB check me out, he decided that he would take the babies out. They were stable but I wasn’t, and if I continued with the pregnancy in the state I was in, I wouldn’t be strong enough to withstand it with all the blood loss. I quickly called my husband who rushed back to the hospital. The OB ordered another blood transfusion (I had just had one the night before!!) because he was confident that without the transfusion I wouldn’t withstand the C-section, I was already weak again from the amount of blood I was losing.

The birth experience is a bit of a blur. From what I recall, they made me sign a bunch of consent forms, wheeled me out to the O.R. (which had a huge team waiting for me, one team per baby) gave me a spinal and some oxygen. I had my husband right by my side. I received one final blood transfusion right before they began cutting me to make sure I would be able to handle the operation and to avoid any chance of extra blood loss.

I had made it to exactly 28 weeks gestation.